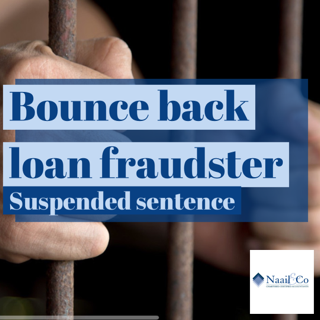 A director of a Middlesbrough telecoms company has been given a suspended sentence after fraudulently taking a £25,000 bounce back loan and then dissolving company the next day

Director has been sentenced to 15 months’ imprisonment, suspended for 18 months, after being convicted under the Companies Act 2006 following abuse of the bounce back loan financial support scheme in 2020.

The company had been incorporated in 2018 and in May 2020 director applied for a £25,000 bounce back loan from his bank on behalf of his business. Under the bounce back loan scheme, genuine businesses impacted by the pandemic could take out interest-free taxpayer-backed loans of up to £50,000.

The loan was paid into the company bank account on 14 May 2020 and the following day Hamilton filed paperwork with Companies House to have the business dissolved.

The company was dissolved in December 2020 and was subsequently identified as likely bounce back loan fraud as part of the government’s forensic counter-fraud work.

Director did not co-operate with the Insolvency Service criminal investigation team, nor attend an interview when given the opportunity.

Only when the Insolvency Service obtained a Proceeds of Crime Act restraining order on his bank accounts did he engage with the investigation, at which point he repaid the bounce back loan in full.

In addition to the suspended sentence, director was ordered to pay £2,500 in costs.

Julie Barnes, chief investigator at the Insolvency Service said: ‘This was a clear case of attempted fraud by a company director who thought he could abuse the Covid-19 financial support schemes and get away with it.

Even though director has now repaid the loan, this sentence sends a clear warning to others that attempting to defraud taxpayers is not acceptable, and when prosecuting the Insolvency Service will use all of the tools in its armoury, including the Proceeds of Crime Act, to prevent criminals from retaining their benefit from crime.’