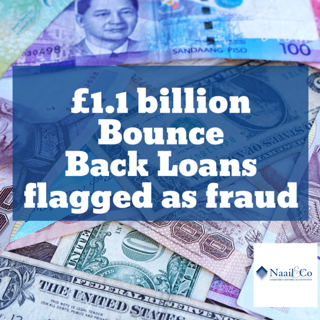 Around £1.1bn of small business loans made under the Bounce Back Loan Scheme (BBLS) have been flagged as suspected fraud, according to banks. Since the scheme was launched in 2020, over £46bn has been lent to businesses as part of the covid loan scheme.

The latest figures show that Starling Bank had the highest percentage in fraudulent claims with suspected fraud valued at £92m, with £1.6bn lent to businesses.

Since 31 July 2022, businesses borrowed a total of £46.6bn though bounce back loans. The first evaluation, published in June, found that up to 500,000 businesses could have permanently ceased trading in 2020 without the scheme.

The Department for Business (BEIS) is working with the National Investigation Service (NATIS) and the Insolvency Service to investigate the levels of fraud. So far, 273 investigations have been opened into loan fraud, with a total value of £160m.

Around 78 suspects have been dealt with to date with 49 arrests made. Insolvency Service activity has resulted in 242 director disqualifications, 101 bankruptcy restrictions and one criminal prosecution.

Earlier in the year the Public Accounts committee criticised the level of fraud found in the bounce back scheme, calling that BEIS had ‘no long-term plans’ for recovering overdue debt.

Dame Meg Hillier MP, Chair of the Public Accounts Committee, said: ‘With weary inevitability we see a government department using the speed and scale of its response to the pandemic as an excuse for complacent disregard for the cost to the taxpayer.

‘More than two years on BEIS has no long- term plans to chase overdue debt and is not focussed on lower-level fraudsters who may well just walk away with billions of taxpayers’ money.

‘The Committee was unpleasantly surprised to find how little Government learned from the 2008 banking crisis and even now are not at all confident that these hard lessons will be embedded for future emergencies.

‘BEIS must commit now to identifying what anti-fraud measures are needed at the start of any new emergency scheme so the taxpayer is better protected in future. It also needs to set out the trade-offs and what level of fraud it will tolerate at the outset.’

BEIS has worked with the banks, lenders, and law enforcement agencies to tackle fraud in the scheme, with over £2.2bn worth of fraudulent applications prevented.

The banks are asking the government to pay an additional £2.6bn in loan claims that have not been settled. Businesses remain responsible for repaying their loans under the scheme and are fully liable for the debt.

In July, the government paid £1.2bn to banks for loans not being repaid by small businesses.

The government announced an additional £48.8m in funding over three years to tackle public sector fraud at the March Budget. This included £13.2m to NATIS, doubling its capacity to investigate bounce back fraud, and £10.9m to enhance the banks counter-fraud and assurance work programme.

The work is also supported by the Public Sector Fraud Authority (PSFA), which has led the developments to better understand the level and types of fraud committed against the scheme.

Current BEIS fraud estimates stand at 7.5% but is due to be updated in the department’s 2021 to 2022 annual report and accounts in November.