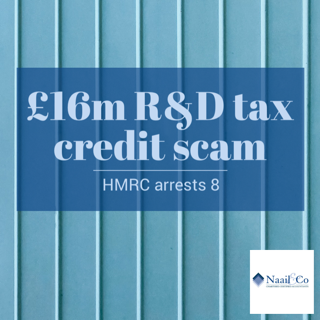 As part of a clampdown on the misuse of research and development (R&D) tax credit, HMRC has arrested a gang making fraudulent claims worth millions.

The arrests were part of a wider investigation into suspected criminal attacks, eight people were arrested on 12 October, including a tax agent.

These individuals are suspected to have conspired to submit over 100 fraudulent research and development tax credits (RDTC) claims, totalling over £16m, and laundering the proceeds.

A group of 130 officers of HMRC’s Fraud Investigation Service executed warrants across multiple locations across England.

An HMRC spokesperson said: ‘We have prevented significant organised criminal attacks and fraudulent abuse of the R&D tax reliefs and are continuing to step-up our monitoring of claims for fraud.

‘By acting quickly to pause payments and implement additional checks on claims, we have protected £46m of public money. We have also arrested eight people suspected of conspiring to submit over 100 fraudulent R&D relief claims, including a tax agent suspected of criminally facilitating the fraudulent attack.’

A rise in abuse of R&D tax reliefs led to the temporary suspension of all R&D payments earlier this year as HMRC extended the verification time and strengthened its checks for fraudulent claims.

‘Claims are checked for suspected fraud and since April 2022, more than 1,600 claimants have been asked for more information to validate their claim. More than 80% of these claims have not been paid out as a result of our checks.

‘R&D tax reliefs are being reformed and these changes will help further reduce abuse.’

HMRC said it has ‘a range of options available to prevent abuse. Following organised criminal attacks on R&D, we briefly paused payments while we brought in more protections’.

The additional checks being made on all claims to protect the R&D tax credit scheme have delayed the usual processing times from 28 days to 40 days. HMRC said it was currently processing 80% of all claims received since the 1 August, within 40 days.

It has also set up a new research and development anti abuse unit which was announced in the Autumn 2021 Budget.

This new 50 strong team working right across HMRC, will not only see increased enquires into the most complex cases and quickly and effectively identify deliberately incorrect claims, but also increase HMRC’s efforts to educate, encourage and facilitate genuine businesses to get it right first time, reducing error as well as tackling abuse.

Following consultation, in November 2021, the government published a report setting out detail on a series of initial reform measures. As well as reforming the relief to address modern forms of R&D using cloud-based services and big data, there are also changes to bear down on abuse and improve compliance.

On reform, further changes set to be introduced from April 2023 will reduce the level of R&D relief fraud. R&D claims will have to be notified in advance, made digitally, include more details about the claim, be endorsed by a named senior officer of the company and include details of any agent who has advised the company on the claim.

Am I liable for Plastic Packaging Tax (PPT)