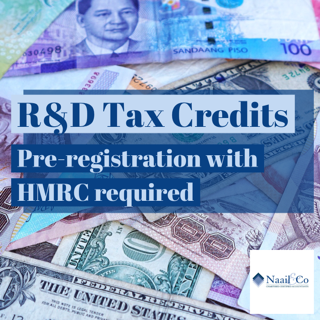 When will HMRC going to introduce new rules for R&D claims?

The changes will come into force from 1 April 2023 and will affect companies claiming research and development expenditure credit (RDEC) and SME R&D relief, as well as some companies which have made a Patent Box election. HMRC estimates that around 90,000 companies will benefit from the changes, while the cost of the Treasury will be confirmed at the Budget this autumn.

Do companies have to claim R&D reliefs online?

To tackle abuse of the reliefs, in future all claims to the R&D reliefs either for a deduction or a tax credit will have to be made digitally, HMRC confirmed.

These digital claims will have to break the costs down across qualifying categories and provide a brief description of the R&D. Each claim will need to be endorsed by a named senior officer of the company.

Do companies need to inform HMRC in advance about R&D claims?

Companies will need to inform HMRC, in advance, that they plan to make a claim. They will need to do this, using a digital service, within six months of the end of the period to which the claim relates. Companies that have claimed in one of the preceding three periods will not need to pre-notify.

Claims will need to include details of any agent who has advised the company on compiling the claim.

The new rules will also amend the time limit for making a claim to two years from the end of the period of account to which they relate, rather than 12 months from the statutory filing date as currently. This will prevent companies which do not receive a notice to file, either because they fail to register or notify HMRC that they are dormant, from benefiting by having more time to make a claim.

It has also introduced a measure to protect SMEs which are mid project and effectively fall out of the SME criteria.

HMRC said that businesses growing and transitioning from the SME scheme to RDEC, will be protected so that where an SME within a group exceeds the size thresholds for an SME, all companies in the group will retain SME status for one year afterwards. Under the current legislation, while the company itself retains its status, other companies in the same group lose their SME status straight away.

Where a company engages externally provided workers to carry out R&D, expenditure on those workers will only qualify to the extent that those workers’ earnings are taxed through PAYE, or attributable to R&D activity outside the UK that is covered by the new section 1138A.

The changes to R&D tax relief were first announced in Budget 2021 and will come into effect from the new tax year.

The new requirement to register claim requests with HMRC comes on the back of increased activity from the tax authority to try to clamp down on spurious claims and abuse of the scheme. This has caused long delays to the processing of claims over the last four months.

Jayne Stokes, associate director at ForrestBrown, said: ‘There is still more to be done to deliver the wide-ranging review of R&D tax reliefs promised at the start of the consultation.

‘Measures aimed at improving compliance, including a requirement for companies to disclose details of any agent who has advised in compiling their claim, will provide the data HMRC needs to target the error and fraud which risks undermining the positive intent of R&D tax policy.

‘The expansion of qualifying expenditure on software and consumables, to also include expenditure on data licences and cloud services, together with the extension of the scope of R&D relief to cover mathematical advances, is also a positive first step towards a modernised definition of R&D. These changes will make a material difference for innovative companies in R&D-intensive and high-growth sectors such as artificial intelligence (AI), quantum computing and robotics.

‘However, concerns remain over the likely impact of limits to relief for R&D activity undertaken overseas but led from the UK. Some narrow exemptions for overseas R&D are made but workforce cost and availability are not among them. This is a real challenge for innovative tech companies who are facing global competition for specialist talent, and it will hamper the UK’s ability to be part of global R&D programmes and a science and technology superpower.’

RSM UK says more action is needed to address R&D abuse and improve compliance across the board.

Darren Griffin, innovation relief tax director, RSM UK said: ‘It is clear more needs to be done to prevent substandard R&D claims being submitted to HMRC. However, the draft legislation presents a clear risk of preventing companies from making otherwise legitimate R&D claims, simply because they are not aware of the relief or whether their activities qualify. That could be a bitter pill to swallow for start-up and fledgling companies and may result in such companies losing out on valuable benefits.’

Am I liable for Plastic Packaging Tax (PPT)