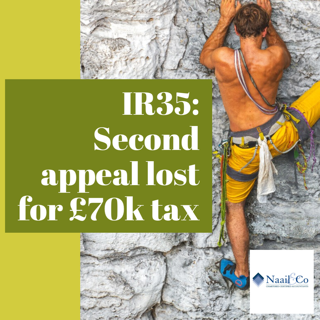 A Nationwide IT contractor has lost his second appeal in an IR35 tax case against a £70,000 tax bill for work conducted at the bank and building society.

Robert Lee, an IT contractor who project managed for Nationwide Building Society through his company Northern Lights Solutions Ltd for seven years has lost his second appeal at the Upper Tribunal over an HMRC IR35 ruling.

Northern Lights Solutions was contracted to work for the building society from 2007 until 2014, and received a £70,000 tax bill in relation to a series of IT-related outside IR35 contracts Lee completed for Nationwide between 2012 and 2015.

HMRC claimed that the way Lee worked with Nationwide meant his engagements should have been classified as inside IR35, making him liable to pay the same National Insurance contributions (NICs) and PAYE tax as a permanent employee would.

Lee challenged HMRC through a First Tier Tribunal (FTT) in February 2020, but his appeal was dismissed. He was then granted permission in July 2020 to launch another appeal, which lead to a two-day Upper Tribunal hearing in May 2021.

In this appeal, the Upper Tribunal considered whether the ‘intermediaries legislation’ known as IR35, applied to the arrangements under which Northern Light supplied the services of Lee to the Nationwide. The case hinged on two aspects: Lee’s right of substitutions; and how much control over his work he had.

It was found that Lee’s contract with Nationwide did include a legitimate unfettered right of substitution, but it was never exercised, and this was confirmed in a 2014 meeting between HMRC, Advantage AxPO – the company that provided the contracts to Lee, Nationwide, and Lee and his accountant. Nationwide never gave witness evidence to back it up as a genuine right.

The FTT noted that it was unfortunate that no witnesses from Nationwide were willing to give evidence and that, therefore, Northern Light was unable to test the evidence in cross-examination. Representatives of Nationwide had been invited to attend the hearing but had refused to do so.

At the FTT hearing, summarised evidence concerning a typical project management role which Lee performed for Nationwide was set out. A governance structure, involving a Nationwide project board, would be established. Day-to-day management and allocation of project tasks was Lee’s responsibility.

Lee described it as his responsibility to determine the cost of delivering the project and when it could be delivered by. He would draw up a detailed plan of activity and then manage that plan until delivery. The plan would be reviewed by the project board and, if thought appropriate, amended, for example as to cost, scope or timing. Lee would then establish the core members of the project team.

Evidence shared in the tribunal ruling suggests ‘it would not be viable for Lee to substitute himself for the work as the substitute would not be able to get through security, they would not have a laptop nor knowledge of the work. The reality was that it was not going to happen’.

The FTT accepted Nationwide’s evidence that if it wished to recruit for a project it would first consider whether existing employees had the requisite skills. Otherwise, Nationwide would try to use an existing contractor but, if none that were suitable were available, it would seek a new external contractor through agencies.

Lee’s evidence was that, as he was on Nationwide’s premises almost continuously and if the company was considering offering a new contract then Nationwide would ask him first if he was interested. If he was interested, then the formal process would be followed through meaning that there was opportunity to consider other contractors but his work and his presence on the site was the best option to go for.

Dave Chaplin, CEO of contracting authority ContractorCalculator, has described the outcome of the ruling as ‘somewhat unfair’, and said the outcome appears to be down to a lack of understanding by the tribunal judges about the reality of working on an IT project.

‘Lee’s contract did include a legitimate unfettered right of substitution, but it was never exercised, and the client never gave witness evidence to back it up as a genuine right.

‘The judges chose to disregard those substitution clauses. Substitution is no silver bullet to definitively proving a worker is not employed unless it has taken place. While I have some misgivings about some of the conclusions drawn, the law appears to be correctly applied.

‘However, many businesses are one-man bands and deliver their services personally. But that alone does not mean they are all employees.’