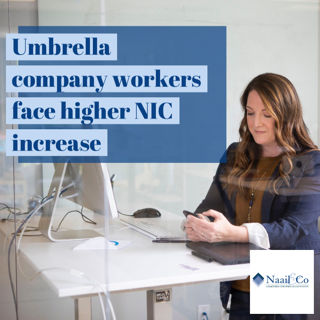 People working within an umbrella company will see a 2.5% increase on their National Insurance contributions (NICs) as they will have to pay for both the employee and employer levy

The Freelancer & Contractor Services Association (FCSA) has highlighted that according to HMRC’s current guidance on umbrella companies, an umbrella company worker will pay twice as much NIC as a PAYE employee and will see their take-home pay reduced further.

The FCSA, which represents 118,000 freelancers, states that this will hit freelance and umbrella workers even harder during the current cost of living crisis and is ‘clearly unfair’.

From the total fees which the umbrella company receives for the worker’s services, it deducts costs including employers’ NICs, and after that deduction pays the worker their specific pay rate.

The worker then pays income tax and employee’s NICs on that specific pay rate which results in an effective double NICs’ deduction for the umbrella company worker.

The FCSA states that due to this, if the umbrella company does not increase its worker’s day rate proportionately, then a worker who earns £50,000 annually will pay an extra £505.40 in employee NICs, but also pay an extra £514.50 of employer NICs.

The group urges the Chancellor to introduce an amendment requiring the end-users to increase the assignment rates by 1.25% to protect workers from the extra burden caused by the NICs increase.

If the Chancellor fails to do this, the group has called on the employment agencies and end-users to step up to support its workers.

Chris Bryce, chief executive, FCSA said: ‘From April 2022, umbrella workers will be doubly impacted by the Chancellor’s increase in National Insurance contributions at a time of spiralling inflation and massive rises in gas and electricity bills.

‘This is a time for recruitment agents and their end-clients to step up to the plate and increase assignments fees to cover the cost to the worker.’

The FCSA is yet another group to come forward to criticise the tax increase. Since it was announced in September 2021, a large number of thinktanks, economic groups, and business bodies as well as parliamentary committees including MPs across multiple parties and members of the House of Lords, have come forward calling the government to scrap it.

A Treasury spokesperson said: ‘The Chancellor has been clear he believes in lower taxes. We took the tough but responsible decision to introduce the Health and Social Care Levy, providing a necessary, permanent source of funding to support the NHS and fix the social care system. Everyone is being asked to contribute, in a fair and progressive way, including the self-employed and freelancers.

It is a matter for individual businesses to determine how they will fund these contributions. However, while methods for determining contractual pay vary between umbrella companies, employer NICs should not be deducted from an employee’s contractual entitlement to pay.