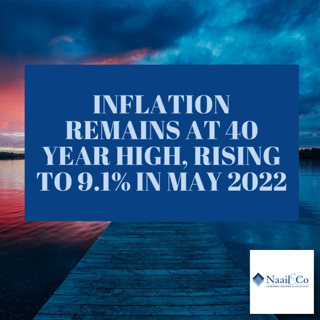 The latest inflation figure for May has hit 9.1%, up slightly on the previous month as fuel and energy prices continue to weigh on prices

The Bank of England anticipates inflation to reach 11% this autumn when the new energy price cap goes into place, which would be the highest level since 1982.

The contributions from housing and household services, and transport, account for 4.29%, which is more than half of the 12-month inflation rate for May 2022.

The largest upward contribution came from rising food and non-alcoholic beverage prices, which were previously on the decline, according to the Office for National Statistics.

The surge in gas and electricity costs, which resulted in 12-month inflation rates of 53.5% for electricity and 95.5 % for gas in April, are arguably the most concerning.

What are average fuel prices in May 2022?

Average petrol prices stood at 165.9 pence per litre in May 2022, compared with 127.2 pence per litre a year earlier. The May 2022 price was the highest recorded, although in the past month prices have continued to spiral with the average cost of filling a tank exceeding £100 for the first time.

Chancellor Rishi Sunak said: ‘I know that people are worried about the rising cost of living, which is why we have taken targeted action to help families, getting £1,200 to the eight million most vulnerable households.

We are using all the tools at our disposal to bring inflation down and combat rising prices – we can build a stronger economy through independent monetary policy, responsible fiscal policy which doesn’t add to inflationary pressures, and by boosting our long-term productivity and growth.

What are the effects of increase fuel prices?

The continual increase in fuel prices is extremely complex and is felt at every stage of the supply chain. As fuel prices continue to increase, costs are subsequently passed on at every level of supply, from the wholesale cost of materials, shipping costs, distribution costs and the price of equipment. As a result, suppliers are passing on the additional charge to the next stage of the chain, and consequently we are seeing this supply chain domino effect in action.

The rising inflation rate is putting the Bank of England under pressure to continue to raise interest rates.

Set against inflation of over 9.0%, base interest rates of 1.25% remain by historic standards very low. Significant rate rises lie ahead we expect base rates to more than double in the next six months.

‘The Bank of England is presiding over what seems likely to be the sharpest tightening of monetary policy since the 1980s. It is touch and go as to whether the Bank will be able to curb inflation without triggering a recession.’

There are renewed calls for the government to take action to support businesses facing a very tough trading environment.

Anna Leach, CBI deputy chief economist, said: ‘Inflation has picked up again, and we expect it to stay elevated over the year ahead, particularly as global price pressures remain strong. The result will be much pain for those businesses most exposed to higher costs, and a historic squeeze on households’ incomes.

‘The void left by falling household spending must be filled by government action to shore up both near and long-term economic growth.

‘Committing to a permanent successor to the super-deduction, as well as supporting green infrastructure and technologies that help cut energy bills in homes and businesses, will both boost economic confidence and reduce exposure to volatile global energy prices.’