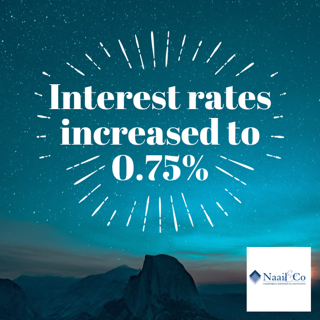 The Bank of England (BoE) has increased interest rates from 0.5% to 0.75% in the third rise in as many months.

The decision to increase the rate by 0.25% comes as the Bank of England tries to ease rising inflation which has caused prices to increase at the fastest rate in 30 years.

The bank’s monetary policy committee (MPC) of nine members voted on the issue with eight in favour and one, deputy governor Jon Cunliffe, voting against. This is the third consecutive increase in the base rate since December and has returned interest rates to their pre-Covid level.

The minutes of the meeting show that the Bank wanted to ‘tighten monetary policy’ to prevent inflationary expectations becoming ‘embedded’, citing rising prices and minimal wage growth before inflation.

It also stated that the effect of Russia’s invasion of Ukraine would also ‘likely accentuate both the peak in inflation and the adverse impact on activity by intensifying the squeeze on household incomes’. It also stressed that this was ‘likely to slow’ down UK economic growth.

The minutes report said: ‘Given the current tightness of the labour market, continuing signs of robust domestic cost and price pressures, and the risk that those pressures would persist, most members of the Committee judged that a 0.25 percentage point increase in bank rate was warranted at this meeting.

UK activity had been somewhat stronger than had been expected at the time of the February report and there had been indications that the current tightening in the labour market might not reverse direction as quickly as had been expected.

‘Monetary policy should be tightened at this meeting in order to reduce the risk that recent trends in nominal pay growth, domestic pricing, and inflation expectations strengthened and became embedded, and thereby to help to ensure inflation was at target sustainably in the medium term.’

After the announcement, the pound dropped 0.2% against the dollar.

Since the global financial crisis of 2008, UK interest rates have been at historically low levels and in March 2020 the rate was just 0.1%.