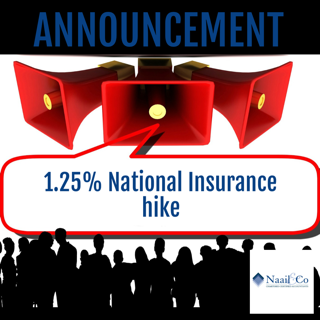 National Insurance contributions will rise by 1.25% percentage points to pay for the social care system in England, with the levy expected to raise about £12bn.

This includes £2.2 billion a year for Scotland, Wales and Northern Ireland, as tax changes affect the whole of the UK.

Prime Minister Boris Johnson said the costs of the programme will be split between individuals and businesses and ‘those who earn more will pay more’.

How is it funded?

A new UK-wide 1.25% “health and social care levy” will come in from April 2022, based on national insurance contributions. It will be paid by working adults, including people over the state pension age (unlike normal national insurance, which is not paid by pensioners).

Initially from April 2022 national insurance contributions rates will go up by 1.25% percentage points while taxes on dividends will also increase by 1.25% to ensure the self­employed do not try and avoid the new levy.

But from April 2023, once tax systems have been updated, the levy will be separated, so that the levy will appear as a separate line on pay slips. At this point working adults above state pension age will start contributing.

40% of all businesses (mostly small business) will not have to pay anything extra. New levy will “share the costs” between individuals and businesses

Speaking in the House of Commons, Johnson said: ‘Some will ask why we don’t increase income tax or capital gains tax instead, but income tax isn’t paid by businesses so the whole burden would fall on individuals – roughly doubling the amount the total taxpayer is expected to pay.

The total revenue from capital gains tax is £9bn this year – our new levy will share the costs between individuals and businesses and everyone will contribute according to their needs.’

How much more you’ll be paying?

Some lower-earning freelancers pay “class two” NI annual earnings of £6,515 up to the class four threshold, at a rate of £3.05 a week.

How National Insurance contributions will change with a 1.25% increase?

National Insurance: Behind the figures

If you earn between £120 and £184 a week, your contributions are treated as having been paid to protect your National Insurance record. If you’re employed, you stop paying Class 1 National Insurance when you reach the State Pension age.

If you’re self-employed you stop paying:

(start of the tax year) after you reach State Pension age

What happens in the rest of the UK?

The Westminster government only controls the situation in England. In Wales, no-one who is eligible for care at home is expected to pay more than £100 a week.

The systems in Northern Ireland and Scotland are different for support at home and residential care.

In Northern Ireland, no-one over the age of 75 pays for home care.

Scotland provides free personal care for people who are assessed as needing support at home, whatever their age. In Scottish care homes, people get free care if they have savings or assets of less than £18,000.

Those with savings and assets of between £18,000 and £28,750 have to fund part of their care. People with more than that have to fund their own care, apart from a £193.50 a week contribution towards personal care and £87 .10 a week towards nursing care.

How to cut your National Insurance bill?

If your company offers a salary sacrifice scheme for pension contributions, then you can slash your National Insurance bill by paying more into your pension.

A salary sacrifice scheme is where you give up a portion of your salary in exchange for a non­cash benefit – such as pension contributions.