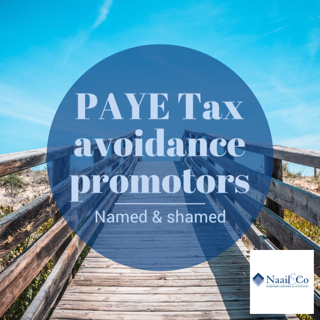 As part of its clampdown on tax avoidance promoters and its “Don’t get caught out” campaign, HRMC has published the names of 3 tax avoidance schemes and their promoters.

HMRC is warning taxpayers not to sign up to a payroll scheme promoted by London-based Peak PAYE Ltd.

HMRC has so far identified the following tax avoidance promoter;

Individuals who are participating in a tax evasion scheme run by any of the above tax avoidance promoters are encouraged to discontinue their participation and contact HMRC as soon as feasible.

The latest disclosure of a tax avoidance scheme promoter follows HMRC’s recent use of new powers as part of its “Don’t Get Caught Out” campaign.

How do tax avoidance scheme work?

The tax avoidance method pays contractors the National Minimum Wage, then disguises the rest of their remuneration as a financial option or a salary advance. The company then states that by joining the scheme, consumers will be able to avoid paying National Insurance and income tax.

‘Tax avoidance schemes are touted as ingenious solutions to pay less tax, but in reality, they rarely function as the promoters promise, and the users end up with large tax bills,’ said Mary Aiston, HMRC’s director of counter avoidance. One of the many things we’re trying to disrupt and push scheme promoters out of business is naming tax avoidance proponents. We want to make sure our consumers aren’t caught off guard by tax evasion.’

Don’t get caught out campaign for tax avoidance by HMRC

The HMRC has now published information about three tax avoidance schemes and their promoters, and will continue to do so in the coming months. This is not a complete list of all tax evasion techniques currently on the market, nor of all promoters, facilitators, and suppliers. HMRC advises against participating in any avoidance schemes.

While one judge found director Arthur Lancaster’s testimony to be “inconsistent with the documentary evidence” and “disingenuous,” both lower tier tribunals determined that AML Tax (UK) Ltd should have disclosed the facts of three tax avoidance schemes they advocated, and they were unable to appeal.

What if I am involved in Tax avoidance scheme?

HMRC’s Tax Avoidance – Don’t Get Caught Out campaign provides taxpayers with a number of tools to help them avoid avoidance schemes, including an interactive risk checker, pay slip guidance, and case studies that demonstrate the dangers of becoming involved in a tax avoidance scheme and the warning signs to look out for.

Taxpayers who suspect they are involved in a tax evasion scheme should report HMRC as soon as possible by phoning 03000 534 226. HMRC is also inviting anybody who have been invited to join a tax avoidance plan or who have come into touch with someone offering such a program to report it to them.

The Finance Act of 2021 was the first to provide HMRC new authority to publicize tax evasion schemes and their sponsors.