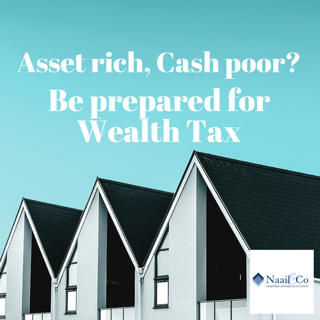 What are Wealth Tax recommendations?

A 1% Wealth tax per year tax rate could be imposed for five years on wealth of more than £1m per two-person household, the Wealth Tax Commission said in its “Final Report”, published on Wednesday, the 9th December 2020.

That would be equivalent to raising VAT by 6p or the basic rate of income tax by 9p for the same period.

One-off taxes have been used after major crises before, including in France, Germany and Japan after the Second World War and in Ireland after the most recent global financial crisis.

What is Wealth Tax?

This is a tax on ownership of wealth, where wealth means total assets less any liabilities/debts.

The debate over wealth tax gained momentum as the government considers how to address its fiscal situation, with the Office for Budget Responsibility predicting borrowing is on course to reach almost 400 billion pounds in the current fiscal year. At almost a fifth of the economy, that’s the largest deficit in peacetime history.

What if you are asset rich, cash poor?

A common concern is that some people who are asset rich but cash poor, might need to sell their home to pay the tax bill.

To avoid this, the commission said payments could be deferred or made in chunks over time, and that pensions-related wealth would be taxed out of a lump sum on retirement.

How will the assets be valued for Wealth Tax?

All personal assets will be valued as followed;

What is Wealth Tax Commission?

The Commission was established in Spring 2020 to provide in-depth analysis of proposals for a UK wealth tax, for the first time in almost half a century.

This Commission studied whether a such a tax is desirable and deliverable. To do this, the Commission worked with a network of world-leading experts, including economists, lawyers and accountants to study all aspects of a wealth tax. The three Commissioners are academics from the London School of Economics and Political Science (LSE) and the University of Warwick, and a leading barrister with long experience of advising High Net Worth Individuals.

What are the recommendations for Wealth Tax?

The Commission recommended the following;

How much population will be effected by the proposed Wealth Tax?

If the government decides individual thresholds of;

How much is expected to be raised from Wealth Tax?

A one-off wealth tax on millionaire household (assuming 2 individuals with £500,000 each) paid at 1% a year for five years would raise £260 billion, according to the final report of the Commission.

At a threshold of £4 million per household (assuming two individuals with £2 million each) and a rate of 1% per year on wealth above the threshold, a one-off wealth tax would raise £80 billion over five years after administration costs.

What will be the benefits or features of Wealth Tax?

The Commission recommended the following benefits/features of the Wealth Tax;

What is public opinion on proposed Wealth Tax?

A survey by Rowlingson, Sood and Tu suggested that 54% of people preferred Net Wealth Tax over increase in Income tax and/or VAT. Supporters of proposed tax suggest that such tax would target those with the broadest shoulders. However, the critics are of the opinion that it would be hard to administer, deter entrepreneurs and fail to raise as much as advocates reckon.

Is wealth tax on the horizon?