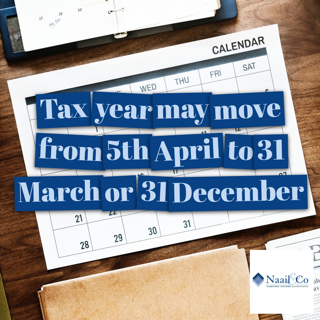 Tax year may move from 5 April

In a surprise move, the Office of Tax Simplification (OTS) has announced that it is reviewing the pros and cons of moving the current tax year end to 31 December or 31 March

This is a provisional scoping exercise to consider the benefits, costs and wider implications of changing the date of the end of the tax year for individuals from the current 5 April, which has been used for centuries, to a 31 March year end cycle. The OTS is also considering a second option of a 31 December year end.

The review will focus on the implications of moving the tax year end date from 5 April to 31 March, or 31 December.

OTS will report back over the summer with detailed analysis of the impact of such a change and the potential benefits for the taxpayers, companies and also any advantages for the Exchequer in terms of tax collection and closing the tax gap.

Many companies used 31 December or 31 March as their year ends so alignment could have advantages for business although it is less clear about the benefits for individual taxpayers.

This is both the end of a calendar quarter and the nearest month end date to the end of the current tax year. It is also the UK financial year end date, to which the UK government makes up its own accounts, and by reference to which corporation tax rates apply.

As well as considering the implications of changing the tax year end to 31 March, the review will also consider potential alternative approaches to addressing practical issues connected with the UK’s tax year running to 5 April.

While primarily addressing tax simplification issues, the review will also take account of the implications of any change in other areas, such as in relation to tax credits and benefits.

There would be significant IT investment costs for HMRC to update its systems for all taxes to ensure compliance. The VAT system would not be affected as this is based on quarterly payment instalments.

Katharine Arthur, head of private client, haysmacintyre, said: ‘Having been in place for hundreds of years, it understandable that the OTS plans to review the current tax year end of 5 April. But a shift in date could pose a mammoth task for tax professionals, HMRC and members of the public alike, requiring a complete upheaval of the UK’s tax and payroll systems and software.

‘The move to Making Tax Digital in 2023 will almost certainly have been a key driver behind the decision to review the tax year end date: for self-employed people, in particular, balancing different deadlines for VAT and income tax can add to any administrative pressures they face.

‘Despite the transitional difficulties entailed with changing the dates, aligning the tax year end with the UK’s financial year end or with a quarter end would make considerable sense. For the self-employed and those filing overseas tax returns too, such a change could prove to be hugely beneficial in the long-term.’

Julia Rosenbloom, tax partner at Smith & Williamson said: ‘ The Office of Tax Simplification’s decision to explore a possible change to the date of the end of the tax year for individuals is to be welcomed given the confusion the current system presents to taxpayers. The current year end of 5 April is part way through a month which can create circumstances where some income accruing in April has to be split between different tax years, with one year between declarations. This is an unnecessary complication for taxpayers.

‘Provided that the government can successfully deal with the transition period, I think in the long-run, changing the date of the end of the tax year would make a lot of sense. Clearly, there are number of possible dates it could be changed to. However, 31 March would mean tax payment dates could essentially remain the same as now, so hopefully administrative upheaval would be minimised. It remains to be seen though whether the government will consider this a priority as the country emerges from the pandemic.’