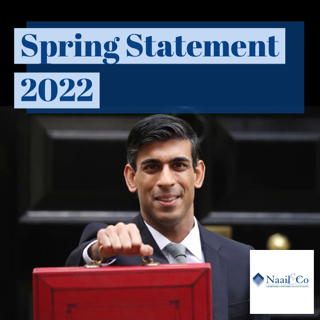 Rishi Sunak announced that National Insurance starting thresholds will rise to £12,570 from July,

The cut, worth over £6 billion, will benefit almost 30 million working people with a typical employee

(March 23) to help drivers across the UK with rising costs – a tax cut worth £2.4 billion. This is the biggest cut ever on all fuel duty rates and means a one-car family will now save on average £100.

To let people keep more of what they earn, the basic rate of income tax will also be cut by 1 pin the pound in 2024, when the OBR expect inflation to be back under control, debt falling sustainably and the economy growing. The cut is worth £5 billion for workers, savers and pensioners and will be the first cut to the basic rate in 16 years.

The Chancellor also set out a series of measures to help businesses boost investment, innovation, and growth – including a £1,000 increase to Employment Allowance to benefit around half a million smaller firms.

“This statement puts billions back into the pockets of people across the UK and delivers the biggest net cut to personal taxes in over a quarter of a century.

“Like our actions against Russia, I have been able to do this because of our strong economy and the difficult but responsible decisions I have had to make to rebuild our finances following the pandemic.

“Cutting taxes means people have immediate help with the rising cost of living, businesses have  better conditions to invest and grow tomorrow, and people keep more of what they earn for years to come.”

Delivering the statement, the Chancellor made clear that sanctions against Russia will not be cost-free for people at home, and that Putin’s invasion presents a risk to our economic recovery – as it does to countries all around the world.

However, announcing the further measures to help people deal with rising costs, he said the extra support could only be provided because of the UK’s strong economy and the tough but responsible decisions taken to rebuild our fiscal resilience.

will share proceeds from growth more fairly – ensuring people can keep more of what they earn.

Help with the cost of living

The Chancellor said that global supply chain issues following the pandemic, as well as Russia’s invasion of Ukraine, are driving up the cost of living for families across the UK.

To combat this, he announced that from 6pm this evening fuel duty will be cut by 5p per litre for 12 months – worth £2.4 billion for hard-working families across the UK.

To ease cost of living pressures for almost 30 million employees, the Chancellor announced that from July 2022, National Insurance thresholds will rise to £12,570 to align with the income tax personal allowance. This simplification means that, from July, 70% of workers who pay NI Cs will pay less of it, even after accounting for the Health and Social Care Levy. Of those who benefit from the threshold increase, 2.2 million people will be taken out of paying NICs altogether.

To ensure more people can keep more of what they earn for years to come, the Chancellor also announced plans to cut the basic rate of income tax from 20p to 19p from 2024. The £5bn tax cut for workers, pensioners and savers will be worth £175 on average for 30 million people and will be the first cut to the basic rate in 16 years.

Mr Sunak also announced that there will be an extra £500 million for the Household Support Fund, which doubles its total amount to £1 bn to support the most vulnerable families with their essentials over the coming months.

The Chancellor also reduced the VAT on energy saving materials such as solar panels, heating pumps and roof insulation from 5% to zero for five years, helping families become more energy-efficient.

This cost of living support comes on top of the measures already announced, including a £9 billion

The government has confirmed it will cut fuel duty by 5p a litre to ease the pain for drivers facing soaring pump prices.

Fuel duty is currently levied at a flat rate of 57. 95p per litre for both petrol and diesel but this will fall to 52.95p per litre, the chancellor confirmed.

It has been frozen for 12 consecutive years but now the chancellor, Rishi Sunak, has gone one step further and cut it by 5p a litre from 6pm tonight.

Calculations by the RAC show that a 5p cut in fuel duty would shave around £3 off the cost of filling a 55-litre family car.

It comes as unleaded stands at an average 167p per litre while diesel stands at 179p per litre, according to The RAC fuel watch.

“This is the biggest cut to all fuel duty rates ever. It will be in place until March 2023 for a full 12-months. The tax cut this year is worth over £5bn.”

Following the announcement by the chancellor, supermarket Asda confirmed it will cut petrol and diesel prices by 6p a litre this evening (including a 1 p reduction in VAT). This will take unleaded to below 160ppl and diesel to 170ppl.

Respite to millions of motorists

Edmund King, AA president, said: “The AA welcomes the cut in fuel duty. However, we are concerned that the benefit will be lost unless retailers pass it on and reflect a fair price at the pumps. Average pump prices yesterday hit new records- despite the fall in wholesale costs.”

Howard Cox, founder of the FairFuelUK Campaign, said: “It would be churlish not to be thankful to the chancellor in cutting fuel duty by 5p for 12 months. It will give some respite to millions of motorists, that have had and continue to have no choice but to drive.

“It will only benefit drivers and the economy if the new fuel taxation level becomes permanent and is accompanied by the introduction of an independent pump pricing watchdog, we’ve notionally called PumpWatch to stop the perennial fleecing of drivers by businesses and speculators further up the fuel supply chain.”

To lift growth and productivity among UK businesses, Sunak set out plans to boost private sector investment and innovation and bring in a new culture of enterprise.

He increased the Employment Allowance – a relief which allows smaller businesses to reduce their employers National Insurance contributions bills each year – from £4,000 to £5,000. The cut is worth up to £1,000 for half a million smaller businesses and starts in two weeks’ time, on 6 April. As a result, 50,000 of these businesses will be taken out of paying NICs and the Health and Social Care Levy, taking the total number of firms not paying NICs and the Levy to 670,000.

The Chancellor also announced two new business rates reliefs will be brought forward by a year to come into effect in April 2022. There will be no business rates due on a range of green technology used to decarbonise buildings, including solar panels and batteries, whilst eligible heat networks will also receive 100% relief. Together these will save businesses more than £200 million over the next five years.