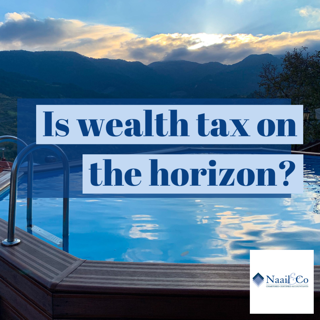 The introduction of a wealth tax could raise a staggering £260bn if a threshold of £500,000 was selected, but valuing assets could be challenging.

Speaking at the Chartered Institute of Taxation (CIOT) and Institute for Fiscal Studies (IFS) debate on the wealth tax at the Labour party conference, a panel of tax experts did not rule out the effectiveness of a wealth tax, but warned that it should be a one-off tax, otherwise there would be potential for widespread tax avoidance. However, the argument for such a tax would be easier for the public to accept if it is seen in the context of paying down debt after the pandemic.

A Wealth Tax Commission was established in April 2020, prompted by the exceptional circumstances of the Covid-19 crisis and was comprised of two academics and a barrister.  The aim was to assess whether a wealth tax would be desirable and deliverable in the UK, and ‘to provide policy makers with a solid evidence base’ and ‘to deliver the first in-depth analysis of a wealth tax in the UK for almost half a century’.

What are the Wealth Tax Commission’s recommendations?

What are the thresholds and rates suggested by commission?

The setting of any thresholds and rates is left as a matter for politicians. However, the report does contain illustrations of potential thresholds and rates, including that of a 5% rate (taxed as an annualised rate of 1% over five years) applied to a series of personal wealth thresholds ranging from £250,000 to £10m.

There is detailed modelling of how much could be raised by a wealth tax and from whom, at different rates and thresholds in a separate report by the Wealth Tax Commission.

Who would pay the wealth tax?

Anyone resident in the UK for more than four out of the previous seven years, including anyone claiming the status of a non-dom. There would be a reduced rate for more recent arrivals. Non-residents would pay the wealth tax on any houses and land owned in the UK, whether owned directly or through trusts or companies.

The Wealth Tax Commission did not recommend extending the tax to other assets owned by non-residents, except perhaps foreign controlling shareholdings of UK private companies.

What are the exceptions to paying the wealth tax?

The Wealth Tax Commission has suggested that if, after an assessment date for the wealth tax has been fixed, someone suffers a drastic fall in their wealth for reasons outside of their control, that it would be possible to provide some relief against the tax due.

A ‘statutory deferral scheme’ would apply if an individual genuinely could not pay the tax out of income and savings over the standard payment period of five years, so that the tax could be deferred until there were sufficient liquid funds available.

It also makes the tentative suggestion of an indefinite deferral where a person’s wealth tax bill was more than 10% of the combined total of net income (after all other taxes) and their liquid assets.

Is wealth tax likely to be introduced?

There has been much speculation about whether a wealth tax will be introduced in the UK.

So far, the Wealth Tax Commission’s recommendations have not been endorsed by HMRC nor by the Treasury, with Chancellor Rishi Sunak stating in July 2020, ‘I do not believe that now is the time, or ever would be the time, for a wealth tax’.  Since then, the Wealth Tax Commission has published its final report (in December 2020) and the government has made no further comments.

Politically, there may be concern as to how voters would react to the introduction of a wealth tax. Polling data cited in the Wealth Tax Commission’s final report suggests that, in principle, there is public support for a wealth tax. However, whether this would hold up in practice is a moot point.

As well as having to pay the tax, taxpayers would face the challenge of having to identify the open market value of all of their assets. Whilse the report contains various suggestions to assist with this (particularly for lower value assets), anyone with assets such as private company shares or art work is likely to find it a time-consuming and costly process.

There is no doubt that the Covid-19 pandemic has left a big hole in the public purse.  However, it is questionable whether the government will opt for a wealth tax. Ultimately, we will have to wait and see, but it seems likely that there will be tax increases of some variety in the not-too-distant future.