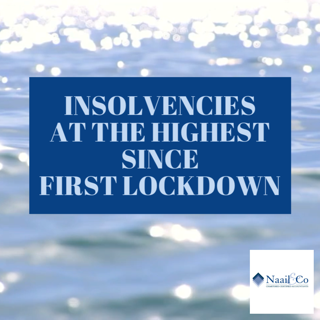 Insolvencies at the highest since first lockdown

Last month there were 1,348 registered company insolvencies, the highest since the first UK lockdown in March 2020 according to figures from the Insolvency Service.

This figure is 71% higher than the 788 registered in August 2020 and an increase of 22% from the 1,094 registered in July, indicating that some businesses are failing despite the easing of Covid-19.

The latest data revealed that there were 1,256 creditors’ voluntary liquidations (CVL) which is the highest level since January 2019 and more than double the number in August 2020.

The Insolvency Service stated that while creditors’ voluntary liquidations numbers were back to pre-pandemic levels due to the temporary restrictions on the use of statutory demands and certain winding-up petitions, the numbers for other types of insolvency, such as compulsory liquidations for companies and bankruptcies for individuals, remain lower.

Restrictions imposed during the Covid-19 pandemic preventing businesses from serving winding-up petitions against debtors will be removed from 1 October.

The insolvency figures published today highlight how much tougher the climate is for businesses and individuals than this time last year, and the toll the pandemic has taken on business and personal finances over the last 12 months.

What is behind the rise in corporate insolvencies?

The increase in corporate insolvencies was driven by a rise in creditors’ voluntary liquidations. Numbers for this process were 115% higher than this time last year, and 30% higher than in 2019, which suggests that despite the opening up of the economy, there are a number of company directors who are opting to close their businesses after a year and a half of trading in a pandemic.

This comes despite the fact that August was one of the better months for businesses since the start of the pandemic. The lifting of the final restrictions and the continued impact of the vaccine rollout means that more people are working, shopping and spending, and that looks set to continue as we enter the autumn.’

For individuals, there were 1,714 debt relief orders in August, down on July’s pandemic high but still 29% higher than later years figures. Changes were made to the eligibility criteria on 29 June which included an increase in the level of debt at which people can apply for a debt relief order from £20,000 to £30,000.

Personal insolvencies have risen sharply compared to this time last year. This has been driven by an increase in the number of individual voluntary arrangements, which could be more of an indication that people are seeking and receiving help with their financial issues, rather than necessarily showing that personal insolvency levels are rising.

The nation’s personal finances have had a difficult 18 months, but the situation appears to be improving. Although unemployment is low and job vacancies are at their greatest level in 20 years, consumers are likely to be concerned about their job stability when the shutdown ends and the possibility of future lockdowns is discussed as we approach the winter months.