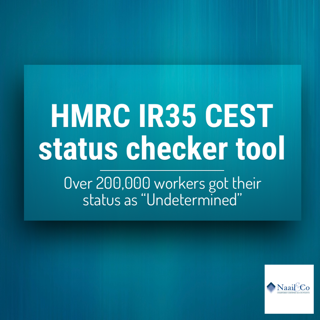 Data published by HMRC show that the tax authority’s IR35 CEST status checker tool determined that 210,000 workers were labelled as ‘undetermined’ when figuring out their employment status.

In this, 1m workers were identified as providing services through an intermediary between the same period, and in around half of these cases, 499,974, were classified as being outside IR35 with 308,176 being categorised as inside.

The data released by the government authority showed that the usage of CEST increased tenfold ahead of the original April 2020 rollout date of the IR35 reforms to the private sector, with 233,748 and 229,177 instances of usage during February 2020 and March 2020.

The onset of the Covid-19 coronavirus pandemic prompted the UK government to delay the onset of the IR35 reforms to the private sector by 12 months, resulting in usage of CEST peaking in March 2021 with 233,133 organisations making use of it.

Commenting on the release of the figures, Dave Chaplin, CEO of IR35 Shield and Contractor Calculator said:

“These figures indicate CEST usage, which will also include multiple interactions by the same person as people experiment with the tool.  The figures are not actual determinations of individual engagements.”

“The tool is not aligned with the case law, omits mutuality of obligation, and puts far too much emphasis on the right of substitution, which will skew the data heavily towards more outside determinations – which may not be supported by the evidence, or be defendable at a tax tribunal.”

Commenting on the number of undetermined cases, Mr Chaplin said;

“It’s interesting to see that in 20% of cases it cannot answer – we are yet to see any advisors or judges simply shrug their shoulders one in five times. We must remember that HMRC Counsel argued in a preliminary tax tribunal that CEST was irrelevant.  We suggest people pay heed to the observations of their own counsel.”

HMRC introduced the CEST service in 2017 to help employers or hirers, and workers determine how the work being done will affect the individual’s employment status for tax and National Insurance contributions. The system assesses the IR35 status of the individual by asking a series of questions about their working patterns and behaviours.

Changes introduced in April 2021 meant that medium to large businesses are now required to assess and set the tax status of contractors they hire. HMRC has rolled out several services to support organisations with the private sector reforms.

These include the introduction of direct webchat support while using CEST, as well as a dedicated helpline that people can use to get help with specific problems while using the tool.