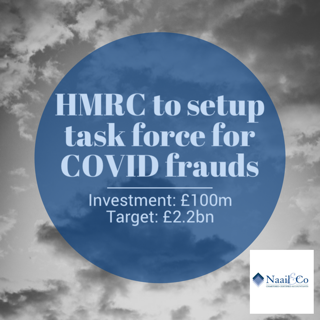 The government will invest over £100m in a taxpayer protection taskforce of 1,265 HMRC staff to combat the estimated £3.5bn fraudulent claims of Covid-19 support packages.

HM Revenue & Customs (HMRC) hopes to raise £2.2bn over the next five years as it hires to a new division heading a fresh clampdown on tax evasion.

The taskforce will focus on abuse of the Coronvirus Job Retention Scheme (CJRS) and Self Employment Income Support Scheme (SEISS). In addition, the government will raise awareness of enforcement action in order to deter fraud, and will significantly strengthen law enforcement for Bounce Back Loans.

Andrew Sackey, partner at Pinsent Masons and former head of HMRC’s Offshore, Corporate and Wealthy compliance unit, says the last time HMRC received additional investment to recruit 1,000 staff into the enforcement of tax fraud was in the 2010 Spending Review, and that generated a fivefold increase in the annual prosecution rate in under five years, making HMRC the largest economic crime investigation agency in the UK.

‘The creation of this massive targeted Covid fraud taskforce is a marked shift away from previous lines contained in the tens of thousands of nudge letters that HMRC have issued while focusing on recovery of inappropriate claims, in which they acknowledged that “mistakes happen”,’ said Sackey.

‘It is a clear message that the government is dedicated to ensuring the hundreds of billions of pounds its spent on Covid support does not end up in the hands of fraudsters. This new task force will be looking to specifically address the more serious abuses of the ongoing Covid relief schemes.’

The 2010 Spending Review and 2015 Summer Budget are two previous examples of HMRC’s enforcement arm receiving very significant investment. This allowed it to increase the amount of revenue it have prevented from being lost through enforcement activity.

HMRC’s increasingly strategic use of their most serious criminal and civil investigations powers has increased the amount of tax income its criminal enforcement directorates protected 33-fold in a decade, from about £150m in 2009/10 to over £5bn in 2019/20.

Dawn Register, head of tax dispute resolution at BDO said: ‘Catching tax cheats will be a key part of the government’s action to repair the public finances. In a bold move to hire over 1,000 new HMRC investigators, the target is to claw back fraudulent pay outs. Given the speed and scale of the response to Covid-19, it is undoubtedly the case that fraud has increased. HMRC has a rich pool of data to identify suspicious claims and grants, and we expect a flood of new enquiries.

‘Given the switch to online and paperless transactions, this is a new focus to tackle fraud, including on electronic sales suppression and forcing information from digital platforms.

‘HMRC powers and technology will be further enhanced by additional money and resources for HMRC to recoup money spent during the pandemic. New steps to tackle tax avoidance and evasion are estimated to raise £2.2bn between now and 2025-26.’

There are concerns that the new taskforce does not divert from current HMRC investigations’ work.

Christopher David, counsel in WilmerHale’s UK white collar defence and investigations practice, said: ‘With the government estimating that up to £3.5bn in furlough and other Covid-related financial support may have been claimed fraudulently or paid out in error, it is no surprise that the Treasury is beefing up investment to crack down on criminal behaviour.

‘The level of resources provided to HMRC will be key to the success of the new taskforce, and whilst the figures announced appear significant, it must not result in the loss of staff from the other vital areas that HMRC covers. HMRC investigations already take too long, and the Taxpayer Protection Taskforce may lead to further delays in tax and other criminal investigations.’

In a separate announcement, the government said it will invest a further £180 million in 2021-22 in additional resources and new technology for HMRC, some of which will be used to continue to fund compliance work on the loan charge, historic disguised remuneration cases and early intervention to encourage individuals to exit tax avoidance schemes.