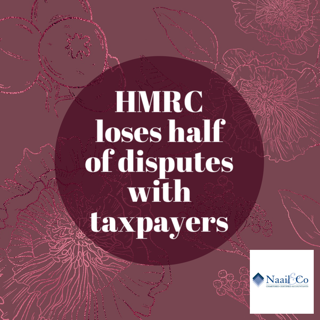 HMRC loses half of disputes with taxpayers

Over the last two years, out of the 32,675 tax claims that had been queried by taxpayers almost half, 16,120, of the claims were dropped altogether by HMRC.

The latest HMRC data shows that 13,302 of HMRC’s initial conclusions were upheld over the two years which is around 40.7% of the overall queried claims and 3,253 were altered or varied.

In 2020-21 the figures show that there were 10,026 claims queried by taxpayers and 34% of decisions were upheld which was around 3,475 claims. The data showed that 670 cases were changed by HMRC and 5,881 were cancelled completely.

The new data focuses on the automatic charges such as penalties for late filing of tax returns and the VAT default surcharge and showed that since April last year the tax authority’s initial decision had been overturned in 80% of cases where the taxpayer complained.

On the data, John Hood, partner and tax dispute resolution specialist, Moore Kingston Smith said: ‘The data highlights that even though HMRC may write to taxpayers setting out the conclusions of its investigation this does not mean that the tax stated to be owed is correct.

‘Businesses and individuals affected by an HMRC decision would be wise to use the statutory review procedure to check whether the tax assessed is, in fact, due as decisions challenged by the taxpayer are reviewed.’

An HMRC spokesperson said: ‘Most rulings HMRC makes are right. A large number of its overturned decisions related to the automated penalties such as for self-assessment late filing or VAT default surcharges.

‘These types of automated decisions have high cancellation rates because they are the first opportunity for a customer to explain why they should not have to pay the penalty and provide a reasonable excuse. The reality is people may be paying penalties that may not actually be due.’

HMRC’s follower notices do not allow an appeal unless taken to court and since its introduction in 2014, the tax authority has issued around 1,330 follower notice penalties, valued at approximately £45m.

Once a follower notice is issued, HMRC can also issue an accelerated payment notice (APN) requiring payment of the disputed tax before the dispute between HMRC and the taxpayer is resolved.

In Finance Bill 2021, the follower notice penalty dropped from the original 50% to 30% of the tax in dispute and introduced a penalty of 20% for those who the tribunal decides acted unreasonably by continuing their litigation against HMRC’s decision.