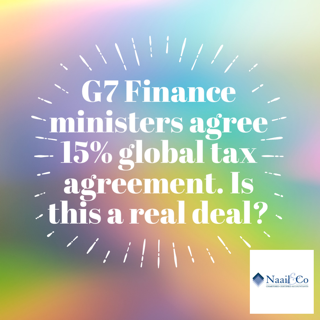 Ministers also agreed to introduce rules to make climate reporting mandatory, and agreed measures to crack down on the proceeds of environmental crimes.

Chairing the G7 finance ministers meeting in London, Chancellor Rishi Sunak came out in support of the introduction of a global minimum tax rate which would hit the largest multinationals including Amazon, Apple, Microsoft and big pharma companies.

Following years of discussions, finance ministers agreed to reforms which will see multinationals pay their fair share of tax in the countries they do business. The move follows the change of government in the US, where president Joe Biden has come out in favour of the introduction of a base global tax rate.

The original proposal set out plans for a 21% minimum tax but this has now been reduced to 15%.

Ensuring markets play their part in the transition to net zero, the G7 also followed the UK’s lead by giving a commitment to make it mandatory for businesses to report the climate impact of their investment decisions.

Chancellor Rishi Sunak said: ‘These seismic tax reforms are something the UK has been pushing for and a huge prize for the British taxpayer – creating a fairer tax system fit for the 21st century.

‘This is a truly historic agreement and I’m proud the G7 has shown collective leadership at this crucial time in our global economic recovery.’

During the meeting, finance ministers agreed the principles of an ambitious two pillar global solution to tackle the tax challenges arising from an increasingly globalised and digital global economy. Existing corporation tax rules are based on a framework first introduced in the 1920s before a globalised trade environment.

Under Pillar One of this agreement, the largest and most profitable multinationals will be required to pay tax in the countries where they operate – and not just where they have their headquarters.

The rules would apply to global firms with at least a 10% profit margin – and would see 20% of any profit above the 10% margin reallocated and then subjected to tax in the countries they operate.

However, some tax experts have warned that companies like Amazon could avoid paying the tax as they operate at very low margins and as a result would not meet the proposed tax threshold.

Under Pillar Two, the G7 also agreed to the principle of at least 15% global minimum corporation tax operated on a country by country basis, creating a more level playing field for UK firms and cracking down on tax avoidance.

The agreement will now be discussed in further detail at the G20 financial ministers and central bank governors meeting in July.

Once agreement is reached, the UK will stop charging the digital services tax which levies a 2% charge on the gross revenues of large multinationals operating search engines, social media platforms and online marketplaces but has had limited effects on changing tax behaviour and raising revenue.

Is G7 tax agreement a ‘real deal’ or is it far from agreed?

The celebration behind the historic G7 global tax deal may not be completely justified, as there are a number of unanswered questions and ‘black holes’, says tax and advisory firm Blick Rothenberg

James Dolan, partner and head of international tax  said: ‘Whilst the proposals establish a fairer global tax system, the Chancellor, Rishi Sunak, cannot categorically say how much additional tax revenue the UK will raise.  The total sums involved are not as large as many have assumed.

‘The OECD estimated a total of up to $100bn (£70bn) per annum or 4% of total corporate tax receipts. With UK GDP at about 2.4% of the global economy, and UK corporation tax at around £60-70bn per annum, this translates to about £2-3bn per annum for the UK economy – not to be sniffed at but a 1p increase on income tax or VAT would raise over twice that sum.

‘The global tech giants have welcomed the proposals, but there should be a concern that they will simply pass on the cost of the tax to the end consumer. Rising cost to consumers is a current concern with the risk of short-term inflationary rises following the enormous liquidity introduced to the global economy during the coronavirus pandemic, and higher associated costs in relation to Brexit.’

Despite the global nature of the tax rate, the US is likely to be the main beneficiary of the 15% global minimum corporation tax rate, as a large proportion of tax revenues will flow back to the US, which is home to most of the major digital multinational corporations.

‘The UK’s “slice of the pie” may not actually generate much more than its digital services tax (estimated at £500m),’ warned Dolan. ‘There is also the question of the administrative burden for taxpayers and respective authorities around the reallocation provisions, and potential for international tax disputes – the associated costs to manage this further compliance in an already complicated domestic and global tax framework could be significant for businesses.

‘Whilst these rules are directed at the largest global companies, there will be on knock-on effect for smaller companies who will unintentionally be caught in the cross-fire and may face even greater compliance burden.’

Another element of the G7 agreement was a push to introduce a stronger framework of beneficial ownership registers, which has already been set up in the UK as part of Companies House.

‘All businesses, not just large multinational corporations, will be impacted by these measures and business owners will be concerned by the increased compliance burden as well security risks such public registers present. There will also be concern about future obligations, and how much information will be made publicly available which may be sensitive for businesses and their owners.’

The G7 support for a global tax rate builds on the work of the OECD’s Base Erosion and Profit Shifting (BEPS) reforms.

Dolan added: ‘The G7 agreement adds significant impetus to the OECD discussions, but we are a long way from the end of the road. There will be further discussions at the G20 in June and the OECD is expected to reach agreement in principle by October.

‘There will then be a lot of details to be thrashed out, such as the tax base on which the 15% applies, and whether this is applied on a global basis or country specific. There is no guarantee that the proposals will pass US Congress, which remains finely balanced. This “agreement” is far from being agreed.’

Options for UK importers for dealing with post-Brexit Import VAT