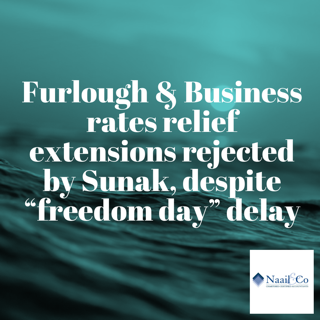 Initially set as 21 June, Boris Johnson confirmed on 14 June, that due to the rising number of cases of the new Delta variant of the coronavirus, ‘freedom delay’ has been delayed until 19 July 2021.

But with national unlocking now scheduled for July 19, business leaders are saying that a failure to maintain economic support measures in line with public health restrictions would push struggling businesses into bankruptcy, risking thousands of jobs.

Chancellor Rishi Sunak is reportedly set to reject calls for an extension of the furlough scheme and business rates relief to businesses despite the prime minister announcing a four-week delay to the lifting of restrictions.

According to the Guardian, sources close to the chancellor have said that he believes sufficient levels of economic support are already in place and that he “intentionally went long” when announcing the March budget to cover for such a situation.

Initially set as 21 June, Boris Johnson confirmed on 14 June, that due to the rising number of cases of the new Delta variant of the coronavirus, ‘freedom day’ has been delayed until 19 July.

As a result, there have been calls from business and associations to see the support extended past September.

He said: “We can’t afford for more companies to go to the wall, taking good jobs with them.

“Government must delay asking businesses to make contributions to the furlough scheme in July and extend the scheme as long as needed.”

Currently the scheme sees the government pay workers up to a maximum of £2,500 until the end of June, and then employers will be asked to fund 10% of the cost in July and 20% in August and September.

Business rate relief is set to fall from 100% to 66% from July 1, although it will remain in place until March next year.

Commercial landlords can also demand rent in full from July 1 – when a moratorium on demands for commercial rent arrears expires -unless the government brokers a deal spreading the financial burden. Officials are understood to be trying to reach an agreement by the end of the week that would mean landlords accepting they will never recover some rent accrued during the pandemic.

Ed Miliband, shadow business secretary, said many businesses are concerned about the removal of support while they are still unable to trade or profit, adding “the price of any delay to the roadmap must not be paid by businesses”.

“Continuing restrictions means the Government must urgently revisit the support available. That starts with holding back on the tapering of business rates relief and extending the commercial rent moratorium for those sectors most impacted.”

A spokesperson for the Treasury told the paper: “The furlough scheme is in place until September – we deliberately went along with our support to provide certainty to people and businesses over the summer. The number of people on the furlough scheme has already fallen to the lowest level this year, with more than 1 million coming off the scheme in March and April – showing our plan for jobs is working.”

They added: “Businesses can also continue to access other support including business rates cuts, VAT cuts and our recovery loan scheme.”