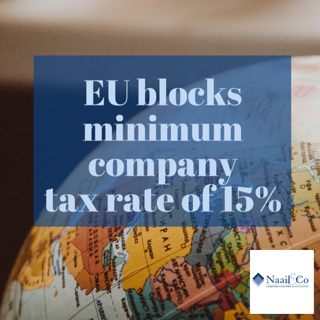 Poland, Sweden, Estonia, and Malta have voted against a French proposed compromise on the introduction of a minimum global corporate tax rate in the EU

Meeting in Brussels on Tuesday, the finance ministers of Poland, Sweden, Estonia and Malta voted against the French-proposed compromise on how to implement OECD’s minimum corporate tax rate of 15% across EU member states.

France, which currently holds the EU’s rotating presidency, has been pushing for quick EU implementation of the overhaul of cross-border tax rules with French president Emmanuel Macron, making the adoption of the new rules a key objective of his six-month presidency of the EU which ends in June.

However, in the face of concerns from some EU countries that stated that they would not be ready, France proposed a compromise that pushed back implementation of the corporate tax plan until the end of next year, rather than January.

It also proposed a political commitment to not let the two pillars of the overhaul be separated, but Poland stated that it ‘did not go far enough’ and it needed ‘stronger legal assurances’.

Swedish, Estonian, and Maltese officials also said that they could not sign up to the deal as it currently stands with Swedish finance minister Mikael Damberg stating that ‘it was too early to agree on an approach on the directive’ and that ‘all technicalities had not yet been resolved’.

As tax matters need the unanimous support of member state governments to become EU law, all 27 members are able to veto the directive.

French finance minister Bruno Le Maire closed the meeting stating that he would put the issue back on the table the next time ministers meet in April.

Ireland and Hungary have had strong misgivings in the past, but voted for the proposal with Irish minister for finance Paschal Donohoe stating that if an agreement was reached to implement the OECD plan, then he would legislate in the upcoming Finance Bill to have it in place by the start of next year.

In a statement, Le Maire said:’ ‘We are in the final centimetres of the negotiation that are always the hardest step to take. We will take another three weeks and I’m sure we’ll get an agreement at the next Ecofin. Tax justice takes a long time but in the end it’s important that tax justice wins.’

After years of negotiation, the OECD’s global corporate tax rate was agreed in October 2021 with the EU originally planning on implementing it in 2023.

The OECD’s plan is split into two pillars; under Pillar One the largest and most profitable multinationals will be required to pay tax in the countries where they operate and not just where they have their headquarters.

Under Pillar Two, countries would implement a minimum tax rate of 15% on multinationals which would make it harder for companies like Google, Amazon, and Facebook to avoid tax by booking profits in low-tax jurisdictions.

Commenting on the ruling, Ernest Urtasun MEP, Greens/EFA Group vice president and member of the Committee on Economic and Monetary Affairs and the Subcommittee on Fiscal Affairs said: ‘We regret that this transposition is to be delayed. The urgency however is obvious. After two years of pandemic and a war on our doorstep, national budgets are stretched to the limit.

‘Delaying this crucial measure would be a serious mistake and it demonstrates once again that the unanimity rule is detrimental to the common interest of Europeans.’