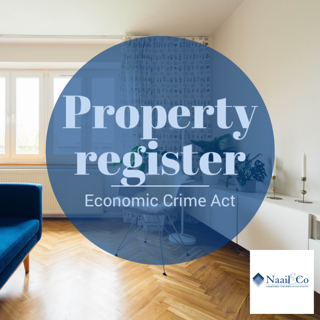 The Economic Crime (Transparency and Enforcement) Act 2022 has received Royal Assent following a speeded up passage through parliament.

Introduced following Russia’s invasion of Ukraine, the new legislation will mean the government can move more quickly to impose sanctions against oligarchs as well as intensifying UK sanctions enforcement.

Who needs to register ownership and identity on new register of overseas owners?

A new register of overseas entities, requiring those behind foreign companies which own UK property to register their ownership and identity. The Act covers corporates, partnerships, trusts and other entities, and there will be a six-month window to register property. The government originally set out an 18-month registration period, but this was amended following debate in the House of Commons.

In England, owners will have to record details of properties held since 1 January 1999, while in Scotland the rules apply to property held since December 2014. The register will have to be updated on an annual basis, confirming ownership arrangements.

The required information about an overseas entity is:

Entities who refuse to reveal their ‘beneficial owner’ will face tough restrictions on selling the property and those who break the rules could face a fine of up to £2,500 per day or up to five years in prison.

The government said this would be ‘a valuable tool for law enforcement agencies in investigating suspicious wealth.

Anyone with a security or investment interest in assets subject to restrictions imposed as a result of non-compliance with registration requirements may be impacted. As the Act will apply retrospectively, it is likely that we will see increased scrutiny on due diligence undertaken on transactions that involve the purchase of UK property, in particular regarding beneficial owners, persons with significant control and connected individuals,

The Act will be a welcome deterrent to abuse of UK rules. Law Society president Stephanie Boyce said: ‘The Economic Crime Act will help the government uncover potential criminal activity in the UK and we welcome the amendments which have improved the legislation for the benefit of consumers and professionals alike.

‘We support the government’s aim to improve transparency of property ownership in the UK and a new register for overseas entities.’

Companies House will now begin work to implement the register as quickly as possible, working closely with the UK’s three land registries. Any foreign company selling properties between 28 February and the full implementation of the register will also be required to submit their details at the point of sale.

The government has also amended the Proceeds of Crime Act 2002, bringing in reforms to unexplained wealth orders (UWOs) to remove barriers to their use, increasing time available to law enforcement to review material provided in response to a UWO and protecting them from incurring substantial legal costs if they act reasonably in a case that is ultimately unsuccessful.

In addition, UWOs will be more effective against those who hold property in the UK via trusts and other complex ownership structures. The government has also committed to publishing an annual report on their use.

Business secretary Kwasi Kwarteng said: ‘There is absolutely no room for illicit finance in the UK, and by bringing forward this Economic Crime Act at unprecedented speed we’ve put Putin, and the corrupt elites propping him up, on notice.

‘Our new register of overseas entities, the first of its kind in the world, will have an immediate dissuasive effect on oligarchs attempting to hide their ill-gotten gains, ensuring that the UK is a place for legitimate business only.’

These measures form part of a wider package of legislative proposals to tackle illicit finance which will be introduced in parliament in the coming months, including reforming Companies House and introducing new powers to seize crypto assets more easily. There will also be tougher reporting requirements for small and micro companies, which will have to file profit and loss accounts, a balance sheet and a director’s report, at Companies House. This will increase the level of transparency.

The Prime Minister also announced a new ‘Kleptocracy Cell’ based in the National Crime Agency, which has been created to target sanctions’ evasion and corrupt Russian assets hidden in the UK.

The Home Secretary will attend the inaugural ministerial Russi0an Elites Proxies and Oligarchs Task Force on Wednesday. This meeting will bring together finance and justice and home affairs ministers from the G7, EU and Australia responsible for the supervision of sanctions and enforcement work. The task force aims to ensure the effective implementation of financial sanctions on Russian elites and oligarchs to further drive collective efforts to tackle Kremlin-linked illicit finance.