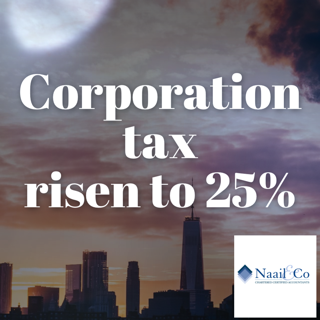 The Chancellor plans to raise corporation tax by 6% to a new 25% rate from 2023, raising an additional £22bn in revenues.

In April 2023, the rate of corporation tax will increase to 25%, a 6% increase from the current 19% while at the same time creating a small profits rate for businesses with less than £50,000 profit who will continue to pay corporation tax at the current 19% rate. A new system of tapered relief will be introduced at the same time for companies making annual taxable profits between £50,000 and £250,000, to link the rate of tax suffered to the amount of annual profits generated.

Historically, smaller companies were subject to a lower ‘small profits’ rate of tax, although companies of all sizes have paid the same rate of tax since 2015.

What are the new corporation tax rates?

For financial year 2023/24, the corporation tax rates will be as follows;

How will your company be affected with tax rate increase?

How much will the additional rate raise in revenues?

How does UK corporation tax rate compare with others?

“To balance the need to raise revenue with the objective of having an internationally competitive tax system, the rate of corporation tax will increase to 25%, which will remain the lowest rate in the G7. In order to support the recovery, the increase will not take effect until 2023”

Zubin Patel, international tax partner at Deloitte, said: ‘Given the fiscal backdrop, there is significant pressure on the Chancellor to raise revenue. An increase in corporation tax, from 19% to 25% from April 2023, is considered to be the most attractive option to begin the process of repaying the deficit.  Corporation tax made up 6% of total tax receipts in 2019/20, and this increase will bring in an extra £12bn in revenue in its first year to which the rate applies.

‘While some elements of the business community will argue that it remains too soon to target businesses with extra tax, the Chancellor rightly points out that the UK has the lowest headline rate of corporation tax within the G7, and so the government regards an increase in the tax rate as reasonable and responsible.

‘Small businesses can breathe a sigh of relief with the additional measures to mitigate the impact of the tax rise, including the introduction of a small business tax rate, the carry back of losses and a new enhanced deduction for some capital expenditure.’

‘Despite a tiered system, the lowest band is so small that anyone other than the smallest companies are going to face significant tax rises.’

The corporation tax rise will come into effect well after the point when the Office for Budget Responsibility (OBR) expects the economy to return to pre-pandemic levels and on the back of an unprecedented period of support for business investment through a 130% upfront capital allowances super-deduction for investment in plant and machinery.

In line with the increase in the main rate, the diverted profits tax rate will rise to 31% from April 2023 so that it remains an effective deterrent against diverting profits out of the UK.

The Treasury Budget Red Book also indicated that the government will review the 8% bank levy and will announce plans in the autumn on how it plans to proceed. The aim is to keep the UK banking sector highly competitive and it seems likely that the bank levy will be substantially reduced due to the corporation tax rise. Top of Form