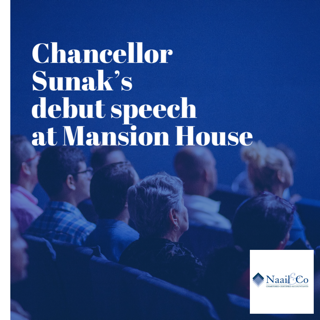 Chancellor Rishi Sunak announced his ambitious blueprints to turn the UK into the ‘most advanced and exciting’ financial services hub, while delivering his debut speech at Mansion House, the Lord Mayor’s residence.

During this major speech, Chancellors’ plans were announced which aim to create tens of thousands of new jobs and boost prosperity in the UK ‘for decades to come’. Alongside the speech, the government have published a 40-page document called: A new chapter for financial services which details the plans announced by the Chancellor today.

The Chancellor outlined how the UK will use its strength as a global financial hub to establish and enhance strong relationships with jurisdictions all around the world, seeking closer links with advanced and emerging financial centers.

The Chancellor referenced the recent financial services partnership between the UK and Singapore that was agreed on 30 June 2021. Sunak states that this deal will ensure greater information sharing, closer cooperation in international fora, and increased certainty over firms’ access to Singapore’s markets.

To deliver this vision Sunak states that the government is currently negotiating financial deals with Switzerland, New Zealand, Australia, and the US and wants to deepen the UK’s financial services relationships with large emerging markets such as India, Brazil and China.

Sunak stated that ‘almost everyone in the UK interacts with financial services daily, from small events, like everyday purchases using a debit or credit card, to big life-changing events like buying a house,’ he went on to say that it was important that people are not left behind by the rapid advancement in financial technology with the government committing to protect access to physical cash.

A consultation on this was also published today alongside the speech and outlines plans for new laws to make sure people only need to travel a reasonable distance to pay in or take out cash. Alongside the legislation that has already been passed to enable cashback without a purchase, these proposals will support the continued use of cash in people’s daily lives and help enable local businesses to continue accepting cash by protecting deposit facilities.

The Chancellor also announced the plans to put the UK at the ‘forefront of technology and innovation’. He outlined how the UK is already supporting innovation but stressed the importance of having the right protections.

Sunak covered that the UK wants to harness the benefits of new technologies like cryptoassets and stablecoins by responding to consultations on their regulatory treatment. The government is also working with the regulators to develop a new sandbox for financial wholesale market infrastructure to allow the UK to promote technological change

Sunak also touched on immigration referencing the new points system that is being introduced. He stated that the UK immigration system needs to provide access to talent for growing, innovative companies. The government will introduce a new scale-up visa stream that will allow those with a job offer at the required skills level from a recognised UK scale-up to qualify for a fast-track visa.

In his speech the Chancellor announced that there will be consultations on reforms to the regulation of wholesale capital markets with the new proposals, consultations on which began 1 July 2021, aim to deliver a rulebook for the regime which is ‘fair, outcome-based and supports competitiveness’.

Other reviews that will be made will be to the UK’s funds regime cover tax, this review will be informed by the government’s recent call for input and is considering changes to support a wider range of investments better suited to investor needs. Other areas of current regulation will also be reviewed, they are yet to be named.

The Chancellor announced that the Treasury will also deliver changes to the financial services regulatory framework to reflect the UK’s position outside the EU through the Future Regulatory Framework Review. The government will publish a second consultation in autumn 2021 that will consider changes to regulators’ objectives, principles and accountability, and responsibility for relevant areas of retained EU law

There will also be a fundamental review of the prospectus regime following Lord Hill’s listing review recommendations. This prospectus review will cover the rules governing the information that companies must publish when raising finance, this wants to make this process ‘simpler, more agile, and more effective’

At Mansion House this morning, Chancellor Rishi Sunak announced his plans to transform the UK into a green finance hub with £15bn investment into environmentally friendly projects

In his first speech to City financiers, Chancellor of the Exchequer Rishi Sunak outlined his plans to transform the UK’s financial services industry through £15bn of green bonds, known as a green gilt, that will support projects that decarbonise key parts of the UK economy while improving climate resiliency and adaptation.

The £15bn would be invested into projects like zero-emissions buses, offshore wind, and schemes to decarbonise homes and buildings will also be eligible for funding.

The green savings bonds will be available through National Savings & Investments (NS&I), offering consumers an opportunity to support green projects while receiving a fixed rate on their savings over a three-year term. The state-owned savings bank will launch the bonds later this year, with a minimum investment of £100 and a maximum limit of £100,000 per person.

Sunak also stated his plans to require companies, pension schemes, financial services firms, and their investment products to report on the impact they are having on the climate and environment. They will also have to report the risks and opportunities facing their business.

These new integrated Sustainability Disclosure Requirements he says will ‘bring together and streamline existing climate reporting requirements and go further to ensure consumers and investors have the information they need to make informed investment decisions and drive positive environmental impact’.

The government intends to legislate and deliver this as soon as they can and will set out its approach to green finance regulation ahead of COP26 in Glasgow this November.

It was also announced that the government will work with the Financial Conduct Authority (FCA) to create a new sustainable investment label, a quality stamp that businesses can use to clearly inform consumers of the environmental impacts and sustainability of their investments.

Sunak says that these two products will give both investors and savers across the UK the opportunity to ‘join the collective fight against climate change and other environmental challenges, reinforce the UK’s position as a world-leader in green finance, and create new jobs in green technologies across the country’.

To conclude his speech the Chancellor said: ‘As the baton passes to a new generation of leaders in finance, I feel optimistic about the future. Ambitious at home. Confident internationally. With a plan to make this country the world’s most advanced and exciting financial services hub for decades to come, creating prosperity at home and projecting our values abroad.