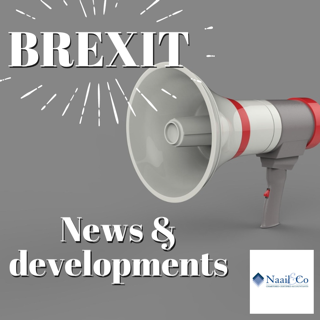 We will continually update the recent news and developments here. There will also be links to separate blogs for important and popular topics like VAT, movement of goods, digital services etc. Lastly, you can find useful links to the government and HMRC website for immediate action.

Get further information from the following links;

Moving goods into, out of, or through Northern Ireland from 1st January 2021

The digital, technology, and computer services sectors from 1st January 2021

Get further information from our following blogs;

Brexit: Supply of digital services (To be uploaded soon)

PM Johnson is believed to make personal intervention ahead of the final deadline for the negotiations to conclude. He may speak to European Commission President Ursula von der Leyen this week to resolve outstanding issues.

No deal Brexit costlier than Covid

Speaking to MPs on the Commons Treasury Committee, The Governor of the Bank of England Andrew Bailey has warned that the economic cost of a no-deal Brexit would be bigger than Covid in the long run.

Prime Minister Boris Johnson made an Agreement in Principal with his Canadian counterpart Justin Trudeau to continue trading under the current EU agreement after 31st December, when Brexit transition period ends.

The negotiators on both sides will continue to work on a comprehensive bespoke trade agreement between UK and Canada.

After the transition period of Brexit ends on 1st January 2021, most UK businesses will be required to use the Non-Union scheme to account for VAT on telecommunications, broadcasting and electronic (TBE) services to EU consumers.

If you do not have a business (or fixed) establishment in the EU, you will be required to register in an EU Member State of your choice, and will be allocated an EU VAT Number (in the format EUxxxyyyyyz). More info on this topic soon in our Blogs section.

The UK and Canada are on a brink to sign a trade agreement, which will replace the existing EU membership deal. Both countries would face tariffs from 1 January 2021 once the Brexit transition period ends, in absence of such a deal. The Number 10 spokesman said: “We’re committed to securing a continuity trade deal with Canada before the end of the transition period. Talks are at an advanced stage and are progressing well.”

The UK is Canada’s fifth biggest trading partner after the US, China, Mexico and japan. The UK has already signed its first free trade agreement with Japan last month, which was hailed as historic moment by International trade secretary Liz Truss.

The UK is set to lose access to the European Arrest Warrant (EAW), along with other important European cross-border criminal cooperation measures such as the Schengen Information System, from 1 January 2021.

The impact of Brexit will single the UK out among advanced economies next year, as per chief economist at KPMG UK. The economy is not likely to recover to pre-pandemic levels for another two years due to Brexit, the firm warned.

Their analysis shows that Brexit could cost the UK economy as much as 2.9% of GDP and manufacturing sectors hardest hit by Brexit could see output at the end of 2021 between 6% and 12% lower than final quarter of 2019.