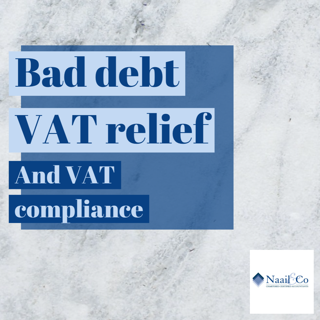 Bad debt relief enables suppliers who have accounted for VAT on a supply to recover that VAT in cases where they do not receive payment from their customer. A bad debt relief scheme is needed because in many cases the time of supply, or tax point, is not determined by reference to the date of payment by the customer and, as a result, suppliers frequently have to declare VAT on their VAT returns before they have been paid.

The operation of the current bad debt relief scheme is set out in full in HMRC Notice 700/18. In summary, suppliers who have not received payment from their customers can make a claim for bad debt relief provided that six conditions are fulfilled:

What six conditions have to be fulfilled to claim bad debt relief?

(1) the sales invoice is overdue for ‘payment’ by at least six months from the later of:

(a) the due date for payment for the supply; and

(2) the claim is made within four years and six months from the later of the above two dates.

(3) the claimant has accounted for and paid the VAT on the supply, via a VAT return or an assessment.

(4) the claimant has ‘written off’ in the ‘refunds for bad debt account’ all or part of the consideration for the supply.

(5) the value of the supply was not more than the customary selling price (this anti-avoidance measure aims to stop claims for overvalued supplies).

(6) the debt has not been paid, sold or factored under a valid legal assignment.

Businesses must take heed of these deadlines and conditions as failure to meet the requirements of the scheme will result in their claim being refused.

Failure to fulfil the requirement that a debt must be ‘written off’ in a ‘refunds for bad debt’ account will also cause a claim for bad debt relief to be refused. It is not necessary for debts to be written off for commercial accounting purposes and businesses can still seek to collect their bad debts.

All that is necessary is that the basic details of the debt are listed in a ‘VAT: refund for bad debts’ account which is separate from the main accounting system. The specific information which must be kept is listed in Notice 700/18 and The VAT Regulations 1995 SI 1995/2518 reg. 168.

Calculating and claiming bad debt relief under the new scheme

If a business has a bad debt which meets the six criteria listed above, the VAT element of the outstanding amount can be recovered from HMRC. The amount claimed is added to the total in Box 4 of the VAT return (i.e. the input tax box) rather than by decreasing the amount of output tax payable in Box 1 and there is no need to adjust the total sales and purchases value in Boxes 6 or 7.

In most cases calculating the outstanding amount is straightforward. The claim is the VAT amount on any debt more than six months old (see condition 1 above). However, claimants must remember that ‘payment’ includes anything receive from anybody in respect of that debt, whether direct from the debtor or paid by a third party or guarantor. Payments can include, for example, non-monetary payments or a mutual debt, so a supplier should offset any amount owed by them to the customer against debts owed by the customer.

It can also be difficult to calculate a bad debt relief claim when many invoices are outstanding, and the customer has only made part payment. The basic rule is that payments received from a customer are allocated to the earliest invoice first. However, if the customer (not the supplier) specifically allocates a payment to an invoice the FIFO (‘first in first out’) rule does not apply.

The current or ‘new’ bad debt relief scheme was introduced from 1 April 1989. However, there was an extended transitional period from the old scheme which applied before this date. The old scheme finally ceased to apply on 19 March 1997 when the Finance Act 1997 was passed. The old scheme was more complicated than the new scheme. Under the new scheme bad debt relief can be claimed as soon as a debt is more than six months old, whereas under the old scheme additional conditions applied. Notably, suppliers were required to tell customers when they made a claim.

The ‘new’ bad debt relief scheme has been in force for over 30 years and many people working in tax will never have come across its predecessor, the ‘old’ scheme. The new scheme does have its complexities. However, it is essentially straightforward and easy to apply provided the conditions set out in HMRC Notice 700/18 are met.