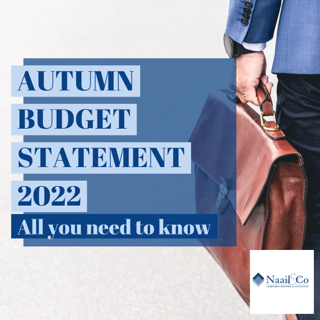 Autumn Budget statement 2022
All you need to know

The current tax-free Personal Allowance of £12,570 will be frozen until April 2028 – a further two-year extension to the freeze which was previously expected to end in 2026. A classic example of stealth tax, where tax in collected without increasing the tax rates. Freezing of personal allowance threshold means those receiving a wage rise will pay more tax as the tax-free allowance will not increase accordingly.

Around 30 million people will be affected adversely with this announcement.

The thresholds for 20% basic rate and 40% higher rate will be frozen until April 2028, dragging more people into higher rates of tax. Also, this announcement may push non-taxpayers into the basic rate tax bracket, including some two million more pensioners who will benefit from the state pension triple lock increase this year.

Around 750,000 people could be pushed into a higher rate tax band from April 2023 as a result of pay rises and a freeze on income tax thresholds.

The Autumn Statement reduces the income tax additional rate threshold from £150,000 to £125,140, increasing taxes for those on high incomes from 6 April 2023. This announcement will pull more top earners into the 45p tax bracket.

Chancellor Jeremy Hunt said: “We have tried to be fair by following two broad principles, by asking those with more to pay more. I have not raised headline rates of tax”

Taxpayers with dividend income have also been impacted by the change to dividend tax rates from April 2022, which increased by 1.25% to deter taxpayers from using dividends to avoid the increased National Insurance rates and anticipated Health and Social Care Levy. Although this was abolished for employers and employees, the rise remains in place for dividends.

The tax-free Capital Gains Annual Exemption will be reduced from £12,300 to £6,000 from 6 April 2023 and further reduced to £3,000 from 6 April 2024. However, despite speculation before the Autumn Statement, the rates of Capital Gains Tax payable on gains above the Annual Exemption amount remain unchanged at 10% to 28% (depending on the individual’s level of income and the type of asset sold). The CGT proceeds reporting limit will be fixed at £50,000.

When you sell or otherwise dispose of assets, such as personal belongings, a second house, or shares that aren’t included in an ISA, capital gains tax is levied on any “gain” or profit you make.

This represents an increase of over £1,600 to the annual earnings of a full-time worker and is expected to benefit over 2 million low paid workers.

Inheritance tax is payable on any estate above £325,000 – the tax rate is currently 40%.  There is also the ‘residence nil-rate band’, which increases the tax-free allowance to £500,000 when the family home is passed to children/grandchildren. Both of these thresholds have been frozen until 2028.

Since 2010, state pension hikes have been based on the so-called “triple lock” agreement, which ensures that benefits would increase in accordance with the larger of either September’s Consumer Prices Index (CPI) measure of inflation, average wage growth, or 2.5%.

Due to an increase in average earnings growth brought on by workers returning from furlough and the lifting of pandemic-related limitations, the triple lock was halted this fiscal year, and the increase was replaced by the “double lock,” which is based on the higher of 2.5% inflation or CPI.

The government announced today that the triple lock would be reinstated for both new and basic state pensions, resulting in a 10.1% increase.

The Chancellor announced that public spending on R&D tax credits will be increased, reaching £20bn annually by 2024-25. These Autumn Statement 2022 rate changes will be legislated for in the Autumn Finance Bill 2022.

Chancellor Jeremy Hunt has today set out additional support for the business rates sector within the Autumn Budget. With the confirmation that the 2023 Rating revaluation will go ahead as planned, the Chancellor confirmed two thirds of properties will see no increase to their bills next year.

From 1 April 2023, rateable values of non-domestic properties in England will be updated to reflect the property market at 1 April 2021. A set of reliefs including a freezing of business rates multipliers and percentage caps on annual increases in business rates will be introduced to mitigate the effect of the new valuations on ratepayers subject to substantial increases in bills.

The percentage increase in business rates bills as a result of the revaluation will also be subject to annual caps until 2025/2026 based on the rateable value:

The proposed caps for 2024/2025 and 2025/2026 will be adjusted by the rate of inflationary increase to the business rate multipliers in due course.

Business rates reliefs for the retail, hospitality and leisure sectors introduced during the pandemic will be extended and increased by 25%.

Following consultation on prospective reforms to business rates, the Government has decided not to introduce an online sales tax.

An EV is currently taxed as a benefit in kind (BIK) when made available for private use by an employer for an employee with a cash equivalent of 2% of the list price, and the government committed to retaining this rate until April 2025.

This change has been anticipated by the Fleet industry and they, along with employers, will be pleased that we have certainty for next 4 years. Despite the increases announced, EVs are still a very attractive proposition for both employee and employer alike

The rate of diverted profits tax will rise by 6% from the new tax year, according to the Autumn Statement Green Book

From April 2023, the rate of diverted profits tax will increase from 25% to 31%, in order to retain a 6% points differential above the main rate of corporation tax, and therefore ensure that it remains an effective deterrent against diverting profits out of the UK.

In the Autumn Statement, Chancellor Jeremy Hunt outlined a number of changes to the energy profit levy, alongside a new and temporary tax on electricity generators

From 1 January 2023, the rate of the energy profits levy will be increased to 35% from 25% to ensure oil and gas companies benefiting from increased profits will pay more in tax.

In addition to this, a new and temporary tax of 45% will be charged on the profits of electricity generators which, like the oil and gas sector, have seen profits increase.

The energy profits levy will see an overall rise in payments from 65% to 75% on profits from UK operations. This will last until March 2028, extended from the previous end date of December 2025.

The government has confirmed that it will introduce the global minimum corporate tax rate for multinationals from 2024.

The 15% minimum tax rate on multinationals is known as the OECD Pillar 2 rules and they will come into force for accounting periods beginning on or after 31 December 2023.

‘This will protect the UK tax base against aggressive tax planning and reinforce the competitiveness of the UK, raising £2.3bn a year by 2027-28,’ the Treasury said.

Following consultation, the government will legislate to implement the globally agreed G20-OECD Inclusive Framework Pillar 2 in the UK.

The Energy Price Guarantee (EPG), implemented in October to shield homeowners from a horrifying 80% increase in energy costs, will continue after April, according to Chancellor Jeremy Hunt’s announcement today. However, the amount of support will be drastically reduced. A typical dual-fuel home currently pays £2,500 per year under the EPG; starting in April, that amount will increase to £3,000 per year until the end of March 2024.

These will be distributed throughout the UK and are in addition to the current cost of living payments made this year. You could receive one, two, three, or all of the payments, up to a maximum of £1,350, depending on your specific situation. They won’t be subject to taxes, won’t count toward the benefit cap, and won’t affect current benefit awards.

The specifics and timing of how the payments would be made, however, have not yet been determined. Here is what we currently know:

The government has stated that more homeowners who are having trouble making their mortgage payments would be eligible for assistance next year. From spring 2023, access to the ‘support for mortgage interest’ “SMI” scheme will be expanded – meaning you might be able to get help covering the interest element of your mortgage repayments if you’re struggling.

To qualify for SMI, you usually need to be earning one of a number of qualifying benefits, such as universal credit or pension credit. The list also includes income support, income-based jobseeker’s allowance and income-related employment support allowance, but these legacy benefits are no longer open to new applicants.