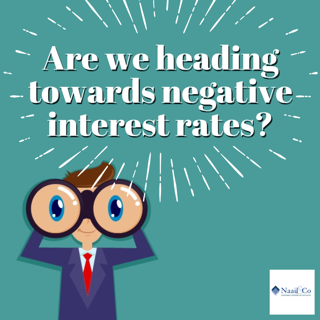 Are we heading towards negative interest rates?

What is negative interest rate?

This extraordinary monetary policy tool is used to strongly encourage lending, spending, and investment rather than hoarding cash, which will lose value to negative deposit rates.

When interest rates turn negative, the banks, building societies and other lenders have to pay to keep their excess reserves stored at the central bank, rather than receiving positive interest income.

The negative interest rate is certainly an unusual monetary policy tool but not unprecedented in the world economies. People and businesses tend to hoard money as opposed to spending money and investing, during deflationary periods. This results in a collapse of aggregate demand, which leads to prices falling even further, a slowdown or halt in real production and output, and an increase in unemployment.

Are we heading towards negative interest rate?

The Bank of England (BoE) has indicated that banks, building societies and lenders have 6 months to prepare for negative interest rates, however BoE stressed that;

“Nobody should take any signal from this”

as this does not mean that negative interest rates are “imminent, or indeed in prospect at any time”.

The Bank of England has held interest rates at a record low of 0.1% since March 2020 to boost the UK economy. The policymakers at BoE have said that the request did not mean negative interest rates are imminent or even likely, but they need negative interest rates as an available option in its economic toolbox in the event of another downturn. So, we are one step closer to the exciting possibility of banks paying us to borrow and charging us to save money.

The negative interest rates play a favorable role in improving stock market outlook. Savings become less attractive if there is no incentive whatsoever in terms of interest and consequently savers are more likely to invest their savings in stocks and shares. More investment from general public certainly assists share demand and price.

On the other side, quoted companies will have access to cheap debt, encouraging them to borrow more and invest in new projects. This, in turn, sparks growth in the economy and act as a catalyst for improved share pricing.

Has any other country introduced negative interest rate?

In recent years, the unorthodox monetary policy tool of negative interest rate policy (NIRP) has been implemented by central banks in Europe, Scandinavia, and Japan. This was designed to kickstart economic growth through public spending and investment, as depositors and savers were incentivized to spend cash rather than store it at the bank and incur a guaranteed loss.

These Central Banks charge local banks to deposit money in the hope this will encourage them to stop hoarding funds, and instead lend more to each other, to consumers, and to businesses, in turn boosting the broader economy.

It is still not clear if turning the interest rates negative has achieved what it was meant to achieve in those countries.

Around 9 out of 10 mortgages in the UK are taken out on a fixed rate basis. You will not notice any difference if you are on a fixed rate mortgage product of your home or buy2let property, even if the bank interest rates fall below zero.

If you are on a variable-rate mortgage or a tracker mortgage product, your rate could fall a little if the base rate turns negative. However, the reduction is likely to be limited by lender’s terms and conditions. Most of the lenders and banks, particularly Nationwide building society, will never reduce their rate they track below 0% on mortgages. Therefore, if your mortgage is at base rate plus 1.5%, it will never fall below 1.5%.

The new mortgage products will certainly become cheap and more attractive to borrowers, should the bank interest rate turns negative.

Interest rates on savings were already not that great prior to pandemic but they nosedived since the pandemic began and even the government-backed National Savings and Investments (NS&I) have slashed returns. A negative interest rate is likely to lead to more accounts paying 0% or only slightly above that, meaning the value of deposits is further eroded by inflation.

If you are a wealthy saver with large sum of money/deposits, you could even face a charge for holding large sums with bank and building societies. UBS is already charging a fee for cash savings of more than €500,000 (£438,000) to their ultra-rich clients and they are planning to lower this threshold later this year. Other banks like Danish Jyske Bank, also apply similar charges.

How will negative interest rate effect loans and credit cards?

Personal loans are usually taken out on a fixed rate and therefore they will remain unaffected in case of negative interest rates.

Typically, credit card rates are low for new customers in the form of interest free periods for new customers but rise far above the base rate once introductory periods have ended. So, they will not be anywhere close to falling into negative territory.