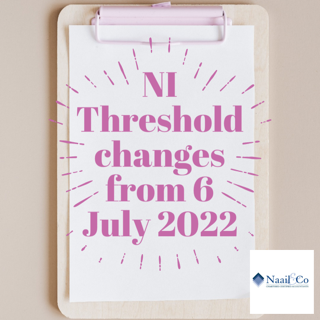 The Chancellor raised the National Insurance thresholds for the 2022-23 tax year in his Spring Statement in March. Employees and self-employed people will pay National Insurance contributions on a smaller portion of their income or profits as a result of this change.

What is the new National Insurance Threshold?

From 6 July 2022, the threshold will rise by £2,690 from £9,880 to £12,570, bringing the NICs and income tax thresholds into line for the first time and potentially leading to a merging of income tax and NICs into a single threshold.

How does the new National Insurance Threshold impact us?

The increase in the threshold will save workers on average £330 in taxes, although it was implemented three months into the new tax year, the actual average savings will be £267.

Resulting into the primary threshold rising from £190 to £242, however, the upper earnings cap will stay at £967. Over this point, all employees pay a lower rate of National Insurance.

Employees will pay National Insurance at a rate of 13.25% beginning April 6, 2022, as a result of the introduction of the health and social care levy, reflecting a 1.25% surcharge on employees and employers.

The tax burden, however, remains at its highest level in 40 years, thanks to the Chancellor’s decision to freeze the base tax-free allowance for three years, until 2025-26.

With the prime minister under fire from backbenchers, there have been calls for tax cuts, with the projected fall in the base income tax rate to 19% being introduced sooner rather than later. However, when the cost of living problem impacts low and moderate earners, reverting to an annual adjustment to the tax-free personal allowance would be appealing.

What is the National Insurance limit for self-employed people?

We will publish further information on the changes for self-employed taxpayers in due course.