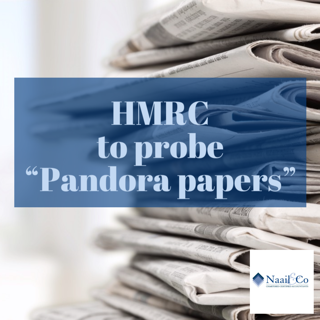 Chancellor Rishi Sunak has announced that HMRC will examine the 12m documents in the ‘Pandora Papers’ for evidence of tax avoidance in the UK.

In response to the release of the ‘Pandora Papers’ which revealed nearly 12m documents of offshore deals, investments, and other financial dealings of 35 current and former world leaders and hundreds of politicians, celebrities, and business leaders who have used tax avoidance, property deals or other schemes to hide their wealth.

Speaking to BBC Breakfast this morning, the Chancellor said: ‘My understanding is we carry out compliance checks in line with the referendums and political parties legislation that was put in place by the Labour government.

Sunak also told Sky News on Monday morning that he had never benefited from any offshore schemes of the kind described by some of the leaks.

The Chancellor added: ‘I’ve seen these things overnight as well and it’s always tough for me to comment on them specifically given they’ve only just emerged, and of course HMRC will look through those to see if there’s anything we can learn.’

Talking to BBC Radio 4, this morning in response to being asked whether he was ashamed that London is a haven for those looking to get out of paying their fair share of tax Sunak stated: ‘I don’t think it’s a source of shame because actually, our track record on this is very strong.’

‘As you’ve seen from the Pandora papers, it’s a global problem, there’s a global dimension to it and we need other countries to co-operate with us to tackle this, but we’re determined to do that.’

The documents include information from 14 financial service companies in countries including the British Virgin Islands, Panama, Belize, Cyprus, the United Arab Emirates, Singapore, and Switzerland.

Rachel Clark, associate barrister, Bright Line Law said: ‘Including more than 11.9m records, amounting to around 2.94 terabytes of data, and pertaining to more than 100 billionaires, the Pandora Papers have handed HMRC a wealth of data on a platter.

‘Bearing in mind the 2019/20 tax gap of £35bn, some funds may eventually be clawed back. HMRC has had some successes in the past – as at November 2020, its work on the Panama Papers had produced about £190m in yield.’

Tax Justice UK has also launched a petition calling on the UK government to close tax loopholes for the rich and powerful revealed in the leak.

Its statement said: ‘The Pandora Papers have exposed how the rich and powerful can use offshore structures to slash their tax bills and hide what they’re up to. A former UK prime minister, a major Conservative donor, and even the Crown Estate are caught up in the story.

‘It is deeply unfair to see rich people and politicians paying less tax at the same time that the government is raising taxes on ordinary workers.

‘The Prime Minister and his government have to stand up and fix the system. This means closing loopholes and investing properly in HMRC so that everyone pays their fair share.’