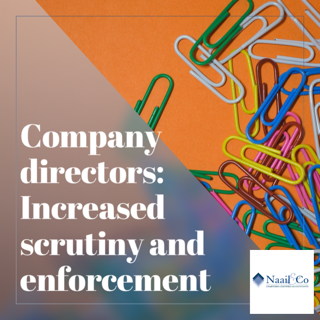 Risks for company directors on the rise

Increased accountability for directors and more scrutiny on decision making is part of proposed audit reforms, but what does it mean in practical terms for directors.

Risks for company directors are on the rise. Increased scrutiny from regulators and shareholders, combined with an unprecedented legal and financial climate brought about by Covid and other world factors including current events in Ukraine, mean that it has never been more important for directors that they are actively engaged in the stewardship of the companies they represent and the decisions that are taken. This is the first of a two-part series looking at some of the key areas for directors to keep front of mind for 2022 and beyond.

The UK government’s much anticipated response to its 2021 consultation on Restoring Trust in Audit and Corporate Governance is due imminently. The proposals in that consultation had at their heart increased accountability for directors.

Most of these proposals are intended to apply to public interest entities (PIEs, the definition of which would be extended to include large private companies and large AIM listed companies) although the clawback requirements may be more widely imposed.

If introduced, the proposals will increase scrutiny on directors from regulators but will likely also give rise to private actions by shareholders, and other interested parties. Even if they are introduced in a slightly watered-down form, the direction of travel is clear and increased scrutiny of directors’ decisions and conduct appears inevitable.

The government proposals on Restoring Trust in Audit and Corporate Governance include replacing the Financial Reporting Council (FRC) with a new regulator, the Audit, Reporting and Governance Authority (ARGA).

In the meantime, the FRC has recently published its own three-year plan and budget in preparation for transition to the ARGA. The FRC’s plan emphasises its expectation that it will be granted regulatory powers and funding. Given that it includes a significant increase in anticipated budget for enforcement action, we anticipate a greater emphasis on investigation and enforcement.

The Covid-19 pandemic has placed unprecedented financial strain on companies in a wide variety of sectors and was met by a range of financial packages from the UK government, together with a temporary suspension of wrongful trading rules. Those rules are now back in play.

A significant increase in corporate insolvencies is anticipated as financial aid is unwound and creditors start to focus on long-term financial viability of businesses, rather than short-term liquidity solutions to tide them through the uncertainty of the pandemic.

Liquidators and administrators have, for a long time, had significant investigatory powers under English law to look behind decisions made in the period leading to insolvency. These include an obligation on directors to provide any information about the company that the officeholder reasonably requires; attendance on the officeholder for interrogative interviews, often akin to cross-examinations in court; and a duty to provide books, papers or other records in the directors’ possession or control insofar as they relate to the company or its dealings.

These obligations can be particularly complex where the insolvent company is part of a larger group and the directors in question are or have been directors of multiple companies within the group. Often, the practical reality is that there is relatively little separation between communications concerning the insolvent company and those concerning the wider group. If not managed properly, this can create significant issues where creditors are looking for deeper pockets to chase.

The risk for directors on insolvency has further been increased by the Rating (Coronavirus) and Directors Disqualification (Dissolved Companies) Act 2021 which came into force in December 2021. The Act gives the Insolvency Service a significant new power to investigate and disqualify directors of companies that have been voluntarily dissolved rather than put through a formal insolvency process.

Voluntary dissolution has long been seen as a means of avoiding some of the scrutiny of a formal insolvency process, but the Act re-emphasises the need for directors to take advice before taking the step to dissolve, particularly where the company may be in the zone of insolvency.

The direction of travel for regulatory scrutiny of directors’ dealings and decision-making is clear. Directors will need to be mindful of this and would be prudent to seek appropriate independent advice and representation at an early stage both when making difficult decisions, and also when the regulators come calling.