Landlords not ready to report rental income under MTD 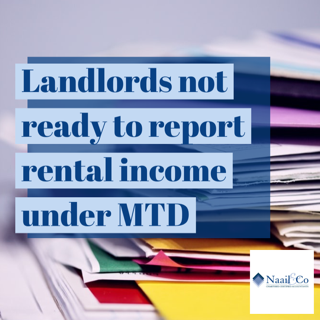 Landlords not ready to report rental income under MTD

More than half of landlords are not aware of the new rules under Making Tax Digital for Income Tax which will require quarterly reporting on property income.

Nearly one in 10 people have income from property with 2.9m individual taxpayers renting out houses and flats, underlining its importance within the UK economy and tax system. However, the lack of awareness of the new MTD reporting requirements is raising concerns, especially as the wide-ranging rules will capture landlords with property income as low as £10,000.

The latest Office for Tax Simplification (OTS) report on simplifying income tax for residential landlords is calling for the threshold to be raised, and flexibility on reporting requirements where more than one agent is involved in the process.

What is MTD rule for lanloards?

The research found high levels of concern about the impact of the extension of Making Tax Digital to income tax from April 2024, which will affect anyone earning more than £10,000 from property rental.

The OTS said that the £10,000 threshold should be raised as it will capture a high number of property owners who make little or no profit from their properties at the lower end of the market, particularly for those earning a single property.

The changes to MTD reporting will affect up to 1m landlords whose property income meets the £10,000 threshold plus an estimated 380,000 landlords who are also self employed where the combined turnover exceeds £10,000. They will have to submit quarterly digital updates of their business income and expenses to HMRC, and an end of period statement on an annual basis.

HMRC has estimated that both of these are likely involve significant additional costs for the taxpayer, although HMRC notes that some businesses may be able to use free software.

The OTS understands that HMRC will roll out a communications and engagement campaign, aimed at taxpayers, to highlight the forthcoming changes and this is to be welcomed.

HMRC are also planning more detailed education for agents on the MTD for Income Tax process and again this is to be welcomed as many agents will have a key role in educating their clients. It would be helpful to have a roadmap as part of the campaign showing when these planned rollouts are likely to take place.

The OTS also criticised the limited pilot programme which is so restrictive that few landlords meet the joining criteria, while there will be little time to assess the beta test results and make changes to the software if required as the testers have to submit a full year’s records.

On a practical level, all MTD for Income Tax filings made by agents will have to be done through the HMRC agent services account. The agent services account, however, only enables one agent to act for a taxpayer for the MTD for Income Tax service at any one time. It is not currently possible to have two different agents – for example, a bookkeeper filing quarterly updates and a tax adviser filing the end of period statement and final declaration – filing under the same service for the same taxpayer.

HMRC is aware of this issue but does not have plans to allow multiple agent filing and authorisation, which OTS says should be a priority.

It has also flagged another issue as nearly half of landlords will be filing for jointly-owned property, and it is not clear how this will be possible under the current proposals.

‘HMRC have set out that each taxpayer has individual responsibility for their MTD for Income Tax filing obligations including filing quarterly updates on an individual basis. This will be problematic for jointly owned properties, where there will be a single set of underlying records. Splitting records at that level will be confusing and likely to lead to error, rather than reducing error,’ the OTS warned.

A long-standing area of complexity for taxation of property is whether costs are allowable straight away as repairs and replacements, or represent capital expenditure as improvements and should be disallowed for income tax.

The OTS recommends that HMRC should improve the guidance in respect of the boundary between repairs and improvements to include clear examples of common situations, perhaps using flow-charts to lead towards case-by-case answers.

The OTS recommends that the government consider introducing a broader immediate income tax relief for all property costs – other than where work is part of the capital cost of the building, such as the initial fit-out of properties bought in a dilapidated state or structural work such as extensions to the property.

‘This would be simpler for landlords and HMRC to administer and would also support the government’s objective in improving the environmental standards of rented property, by offering certainty of tax relief for those costs,’ the OTS report said.

If the furnished holiday lettings regime is abolished the OTS recommends that the government considers whether certain property letting activities subject to income tax should be treated as trading and whether it would be appropriate to introduce a statutory ‘brightline’ test to define when a property trading business is being carried on. It should also restrict the regime to properties used for commercial letting by removing the potential for personal occupation. This would permit a simpler approach to defining the regime.