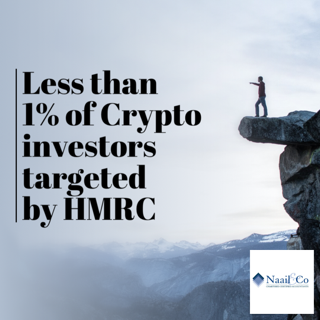 A Freedom of Information (FOI) request from wealth management firm Quilter revealed that the tax authority sent out 8,329 letters to crypto investors about potential capital gains tax (CGT) bills in 2021.

However, based on the estimate from the Financial Conduct Authority (FCA) last year that there a 2.3m British crypto investors in the UK, HMRC’s figure only represents 0.4% of crypto owners.

In October 2021, HMRC announced that it would start sending nudge letters to crypto investors to warn them that capital gains tax is owed on crypto profits.

The tax authority has also released guidance on how individuals should keep records of crypto transactions and report and pay any tax due on the assets. The most recent guidance was released in February and focused on the taxation of cryptocurrency transactions involved in decentralised finance.

According to research by the FCA, the median investment into crypto in the UK is around £260 to £300, and with a majority of crypto investors having less than £1,000 invested in digital assets, many are unlikely to breach the £12,300 capital gains allowance.

However, Quilter stated that HMRC had not ‘done enough’ to properly raise awareness around the tax implications of investing in cryptocurrencies.

Considering the significant interest in crypto assets, it’s surprising to see that only 8,329 people have been sent a letter asking them to review how much capital gains tax they might owe. Most people who do not pay the necessary tax on their gains are likely to be ignorant of what is required.

Is HMRC aware of the number of cryptocurrency accountholders in the United Kingdom?

HMRC has confirmed that it has the ability to obtain a full list of cryptocurrency holders by sending data requests to UK-based cryptocurrency exchanges and other financial organisations.

An HMRC spokesperson said: ‘We want to help people get their tax affairs right and nudge letters are one of the ways we do this. Awareness raising letters are not sent to all taxpayers, but to those who we have reason to believe would most benefit from additional information.

‘Our guidance is regularly updated, and our letter asks cryptoasset holders to review their transactions in light of this guidance to ensure that they are declared correctly. Customers that have invested in cryptoassets can find out more about the circumstances when tax may be due by going to gov.uk and searching ‘tax when you sell cryptoassets.’