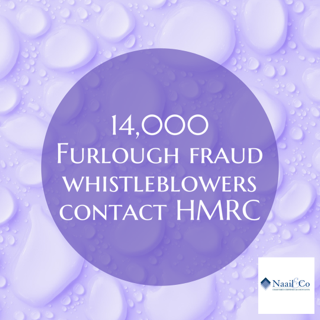 As the number of furlough fraud whistleblowers approaches 14,000, HMRC is picking up the pace on pursuing businesses that fraudulently claimed furlough.

So far, 13,775 whistleblower reports have been received by HMRC about fraud against the furlough scheme as people report their employers, and ex-employers, says law firm Pinsent Masons.

Error and fraud are known to have been widespread since furlough was governed by a complex set of rules that were subject to change. The Coronavirus Job Retention Scheme, which ran from April 2020 to September 2022, saw businesses claim a total of £70 billion. Furlough fraud was estimated to have cost £5.5 billion at that time, or 9% of all claims.

It was extremely challenging for HMRC to identify bogus furlough claims during the height of the pandemic due to the huge volume of claims and the urgency with which payments had to be issued. However, Andrew Sackey, a partner at Pinsent Masons, claims that HMRC has since significantly increased the resources available to its investigation teams to pursue erroneous or fraudulent furlough claims, hiring and training an additional 2,000 staff members in addition to other covid support initiatives.

With an aim toward recovery, issuing fines, and pursuing prosecution or directors’ disqualifications, if necessary, HMRC is currently ratcheting up its enforcement activity. This may apply, for instance, when companies were claiming a furlough while telling or permitting workers to continue working. It might also apply in cases when a previous scam has been discovered but the company hasn’t stepped forward to make things right.

As part of a process of encouraging whistleblower reports from employees, HMRC has made information about whether an employer has made a furlough claim available online. Employees are increasingly using this information to make fraud reports through HMRC’s digital reporting service.

Directors or business owners who are found guilty of furlough fraud may be subject to harsh punishments, such as being held personally responsible for paying back the overpaid furlough payments and receiving jail time.

Sackey said that any business which suspects it may have claimed furlough incorrectly should undertake a fact-finding investigation to establish what may have transpired. Should a breach be found, business owners should seek advice on how best to quantify and voluntarily engage with HMRC to repay the funds. This will give the owner a better chance of avoiding the harshest penalties.

Sackey said: ‘Whistleblowers have played a major role in helping HMRC catch those who defrauded the furlough scheme or were otherwise not entitled to the benefits claims. Significant numbers of employees who found themselves unwittingly playing a part in a breach of the rules or even fraud will have reported them in response.

‘Employers that incorrectly claimed furlough payments would be best advised to seek advice on how best to come forward and mitigate the issue. HMRC is increasingly looking to take strong and public action in respect of those it considers may have taken public money they were not entitled to.

‘This is the kind of fraud that HMRC will, in the most egregious cases, feel should result in criminal prosecution. There is significant public interest in the justice system dealing with those who broke the rules to take advantage of the furlough system at a time of national crisis.’

A recent study by Pinsent Masons showed 268 UK company directors have already been banned from running companies by the Insolvency Service for Covid-related fraud. Some of these directors committed furlough fraud, while others were found to have defrauded the bounce back loan scheme.

One major case of furlough fraud involved a fraudster in India claiming £27.4m in furlough payments over 14 months. Despite never having been to the UK, he registered four companies in London and claimed furlough for more than 2,700 non-existent employees. HMRC recovered £26.5m of this through a forfeiture order in October 2021.

Up to September 2021, £1.3bn in furlough cash had been repaid voluntarily, including from businesses that were entitled to furlough payments.